Combating COVID-19 in the Navajo Nation 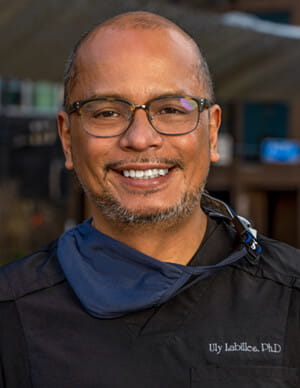 Dr. Ulysses Labilles has one goal: to crush COVID-19. He’s using every tool in his public health arsenal to achieve it by heading the Centers for Disease Control and Prevention (CDC) Foundation’s efforts to root out the virus in the Navajo Nation. He’s also co-leading a groundbreaking initiative into coronavirus mutation sequencing. This allows scientists to identify and monitor how the virus changes, understand how these changes affect the characteristics of the virus, and use this information to predict how it might impact health, vaccine efficacy and treatments.

The Navajo Nation is the largest Indian reservation in the United States, spanning parts of Arizona, New Mexico and Utah. The community surpassed New York state with the highest COVID-19 infection rate in the U.S. in May 2020. At the time, the Native American territory had 2,304.41 cases of the virus per 100,000 people.

“The Navajo Nation was hit very badly during the initial waves,” says Dr. Labilles, a Walden University PhD in Public Health graduate who specializes in applied public health epidemiology. “I learned a lot about the challenges they face, including how the population is usually ignored and is often one of the last groups to get federal help.”

The Indigenous tribe battled unique factors that made it more susceptible to higher infection rates. Most significant are its general household dynamics, in which multiple generations often live in the same home. This creates difficulties if a family member needs to be isolated, making it more likely that all occupants will get sick. In addition, 30 to 40 percent of residents do not have access to running water, which poses a distinct challenge in practicing healthy hand hygiene.

The household factors are what caused Dr. Labilles to immediately advocate for a new testing strategy to find asymptomatic community members. Those individuals were often unknowingly the cause of household infections and, potentially, larger cluster events.

“Previously, you didn’t get tested until you exhibited symptoms,” says Dr. Labilles. “There is a new focus right now on the paradigm of silent spreaders, who are people with COVID-19 who do not exhibit any symptoms but are spreading the virus from one person to the other. They are unaware that they are infectious, and that’s a problem.”

As of mid-March 2021, new daily cases in the Navajo Nation were at their lowest since mid-September 2020 and are continuing to decline. Dr. Labilles attributes some of this to a decrease in testing, as the preference to become vaccinated has increased. This is consistent with trends taking place nationally.

“We’re shifting resources from testing to the vaccination campaign,” says Dr. Labilles. “This means we are less aware of the spread of the virus, thus declines in daily cases might represent a lack of testing. I explained in one of my meetings how we have to revisit our public health messaging to make it known that continuous testing is still vital, even though the vaccine campaign is taking place.” 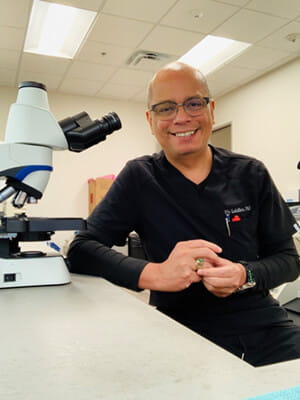 Dr. Labilles and his team are also very concerned about another spike in cases, caused in large part by the ongoing mutation of SARS-CoV-2, the virus that causes COVID-19. This has led him to a concurrent project, which is a comprehensive effort to study and sequence the variants of SARS-CoV-2.

Mutations can trick immune systems, making them more challenging to fight off and rendering antiviral drugs and vaccines less effective. Dr. Labilles’ goal is to uncover more details about the variants, starting with B.1.1.7, which originated in the United Kingdom. It is becoming the dominant strain in the U.S. and is more contagious than other variants.

“We need to continue testing,” says Dr. Labilles. “This includes at-home testing, as well as the seroprevalence surveys, where we use blood tests to identify people in a population who have antibodies against COVID-19. We need to know what mutations are out there because the more it mutates, the more it will affect the vaccines' efficacy.”

As of mid-March 2021, 86 percent of the Navajo Nation received at least one vaccine dose, with 33.8 percent fully vaccinated, outpacing the rest of the country. Dr. Labilles sees less hesitancy with the vaccine than he does with the variant sequencing program.

In 2002, the Navajo Nation banned DNA studies out of fear their samples could potentially pose a threat to their claims to their traditional lands. Distrust of the medical community is deep-rooted, stemming from unauthorized experimentation on Native Americans’ bodies when Europeans first colonized North America.

“With the Navajo Nation, we’re cautious in presenting a project like genomic sequencing, as they are concerned about anything that pertains to human DNA,” says Dr. Labilles. “We had to make it clear that we’re not harvesting any human DNA in the sequencing. We’re looking at the DNA of the virus, not of the person.”

Dr. Labilles is respectful of this history, while also advocating for the significance of viral characterization and contact tracing. Currently, when an individual tests positive for COVID-19, all the people who that person may have come in contact with are notified they might have been exposed to the virus.

“I’ve emphasized the importance of backward contact tracing,” says Dr. Labilles. “Traditional contact tracing is like when you’re driving a car, you’re focused on what’s in front of you. But, as a driver, you need to be aware of what’s going on behind you because someone might rear end you. Backward contact tracing looks for close contacts who may be infectious and asymptomatic."

Dr. Labilles’ next project is to study post-acute COVID-19 syndrome, also known as Long COVID. Some people, including those who had mild versions of the disease, continue to experience symptoms after their initial recovery. These people are sometimes described as "long haulers." An estimated 10 to 30 percent of COVID-19 patients continue to experience symptoms months after their initial diagnosis.

“Walden’s mission for social change plays a big role in what I’m doing now,” says Dr. Labilles. “As a Filipino, you want to do something that makes your family proud. All of us have a story to share, and I thought mine was about earning a doctoral degree and finishing graduate school ahead of schedule. I now know my story is to help end the pandemic.”

Dr. Shanna Barnett, one of Dr. Labilles’ Walden professors and role models, believes he can make a real difference in battling COVID-19 and in making an impact on the health of the Navajo Nation and beyond.

“Dr. Labilles is truly an inspiration to anyone in public health,” says Dr. Barnett, core faculty member in Walden’s Doctor of Public Health program. “His drive and passion for helping others shows in everything he does. He is a great example of how Walden University helps its students empower the greater good through education by creating scholar practitioners.”