A couple’s emotional bond influences the coping skills a wife may develop when her husband is deployed.

That’s the finding of Bryan Cafferky and Lin Shi, authors of “Military Wives Emotionally Coping During Deployment: Balancing Dependence and Independence,” published in The American Journal of Family Therapy. 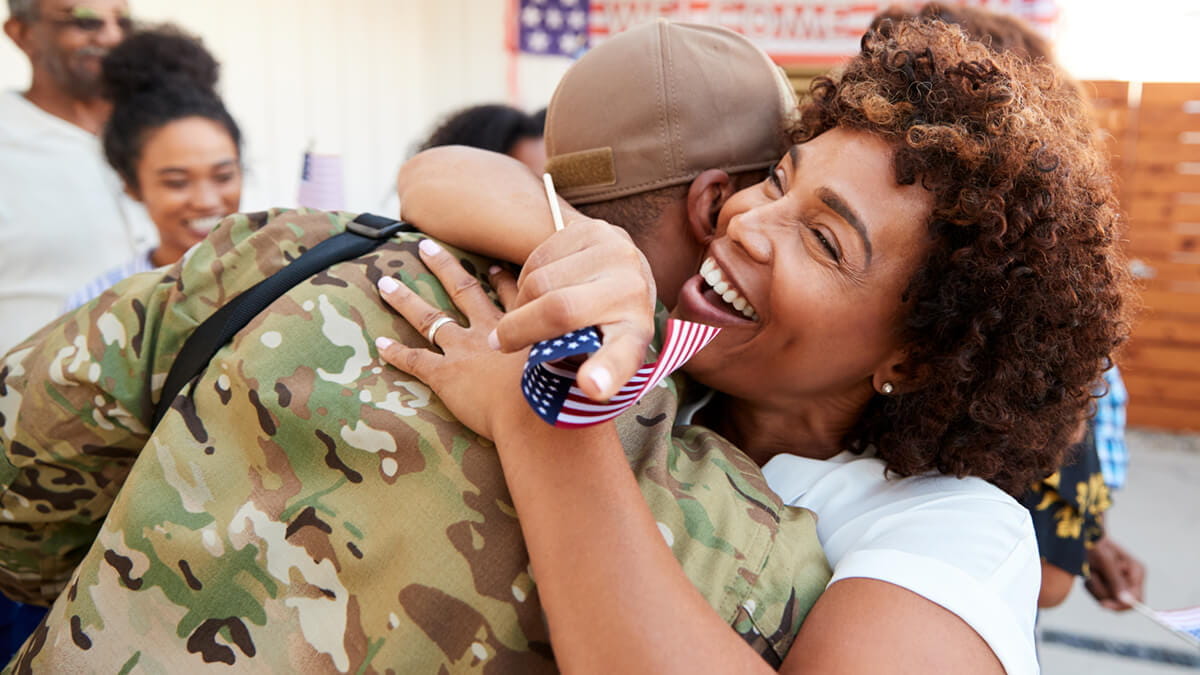 Cafferky and Shi’s research paper is a key reading assignment for students enrolled in the master’s-level course Working With Military Spouses, Families, and Children at Walden University. In the course, MS in Clinical Mental Health Counseling candidates in the Military Families and Culture specialization learn about the unique support needs of military families.

Read along with Walden’s mental health degree–seekers to learn more about how military wives cope during a spouse’s deployment:1

Throughout deployment, military wives ricocheted between feelings of pride, worry, sadness, gratitude, fear, anger, insecurity, and excitement. They specifically pointed to the separation from and worry about their husbands as the generator powering this rollercoaster of emotions. Even wives who considered themselves to be strong, resourceful, and self-sufficient were deeply affected by the separation. The intensity of their distress heightened when wives did not have husbands who were readily available to support or comfort them.

1. Sacrificing Myself When Pursuing Him

The first emergent theme reflected how some military wives adopted coping strategies which pursued unrealistic closeness to their husbands, largely ignoring the reality of deployment, and therefore adversely affecting their own emotional well-being. These wives chased after any news, direct or indirect, about their husband or their husband’s unit. These wives cloistered themselves away from other people and reported becoming extremely “depressed” or “completely devastated,” with some spending most of the day sleeping or crying in bed.

Some wives were angry and resentful of their situation but seemed to use these emotions as a bid for staying emotionally connected. Some wives were angry at deployment, at God, at the military, at the world, and/or at civilians and reported not fully understanding what they had “signed up” for when they married a “military man.” The wives who seemed to express the most anger also reported feeling extremely isolated/lonely, and that they never received enough support from anyone.

2. Preserving Myself by Pushing Him Away

The second major emergent theme reflected coping strategies military wives used to emotionally distance themselves from their deployed husbands. These wives’ emotional distress became so overwhelming that they chose protecting their own emotional well-being over attempting to stay emotionally connected with their husbands whom they perceived to be emotionally unavailable. These emotional distancing strategies included:

Becoming Independent
All but two of the military wives reported an internal shift and arriving at a strong realization that they needed to become independent to survive deployment. These military wives reported feeling pressure from their husbands and their military community to expertly manage all the demanding household and parenting responsibilities. Several of these military wives were able to pinpoint a particular “aha” moment when they realized that they had been “cruel” to themselves by staying at home and avoiding people, or that they had children who needed a mother to survive, or that they had become accustomed to being alone—and that they could only rely on themselves.

Clutching Denial
Some wives reported living in a perpetual state of denial. These wives tried not to learn about their husbands’ situation because it “will ruin your life.” These military wives purposefully held onto denial to escape from their emotional world of worry. A new military wife remembers the first weeks of her first deployment: “I was kind of like in my own world at that point. I think I was in denial a lot. For the longest time I would forget that I was pregnant. It was like my worst nightmare had come true, because what if he didn’t come back?”

Guarding Me From My Emotions
Some wives learned to assiduously guard themselves from their overwhelming emotions, by numbing or erecting an emotional wall to avoid being sucked into deeper feelings of helplessness, hopelessness, and despair. Some military wives described this numbing as a need to turn off or “shut down a little piece of yourself, so you are able to get through [deployment].” In order to maintain perpetual numbness, some wives loaded up their schedules with additional responsibilities to ensure their minds were distracted or did their best to avoid thinking how much longer deployment would last, about their husband’s dangerous situation, or about any positive memories of their husbands.

3. Drawing Strength From Us

The third emergent theme reflected how some military wives coped by drawing on the strength of their emotional connection with their husbands. These wives reported relying on their emotionally available husbands who found ways to connect during deployment. These coping strategies included:

Romancing Yourself
When feeling lonely or distressed, some wives drew upon the strength of their emotional connection with their husbands by walking down memory lane via looking at pictures or rereading letters. One military wife would go in the bedroom and smell his belongings or look through his clothes in the closet in order to engage in what she called “romancing yourself.”

Being With Others
Some wives drew strength from spending time with others, which helped them stay emotionally connected with their husbands. For each military wife who struggled with feelings of loneliness, it helped to spend time with neighbors or friends who inquired about how they were doing, offered to mow lawns and shovel driveways, or otherwise allowed them space to vent. Some military wives took advantage of formal support programs, attended individual therapy or support groups, talked with military chaplains, or called their FRO (Family Readiness Officer)—because as one military wife put it: “Military are good to take care of military.” Even though many wives expected civilians would not understand their experience, each military wife had received some type of support from a civilian friend or family member.

You can help families cope with the complex emotional challenges of military life by choosing Walden’s clinical mental health master’s program and pursuing the Military Families and Culture specialization. In this specialization, you’ll explore the nuances of military culture as well as the common hardships associated with the military lifestyle—from prolonged separation and combat-related injuries to post-traumatic stress disorder (PTSD).

Walden’s accredited clinical mental health degree program can help prepare you for licensure so you will be ready to meet that demand. Let an MS in Clinical Mental Health Counseling help you develop the confidence, qualifications, and critical thinking skills you need to advance your career in counseling and serve the mental health needs of diverse populations.