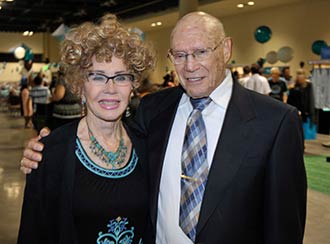 Once again, we have sad news to share with you. On May 4, Walden University co-founder Bernie Turner passed away, less than a month after the death of his wife and co-founder, Rita.

Bernie was a veteran who served in World War II. When he returned from Europe, he worked in the Department of Veterans Affairs, while enrolled at Columbia University, where he sought an education he could use to improve the world. He then worked as an economist, labor organizer and educator — believing that everyone should have an opportunity to achieve their goals. That belief was at the forefront as he and Rita founded Walden, and it continues as part of their legacy.

We know that many of you recently shared your remembrances of the Turners, who were active in our university community long after their retirement. Here are ours:

“Bernie was a man brimming with ideas and the energy and intellect to make those ideas a reality.” -Paula Singer

“Mr. Turner was a pioneer. And he’s directly responsible for changing my life. Had he and Mrs. Turner not had the forethought of creating a university that was student centered and flexible enough to support working adults, I would’ve never completed my doctoral studies.” -Dr. Ward Ulmer

The university has been in close contact with the Turner family, and we wish to convey our heartfelt condolences to them. Please keep them in your thoughts during this difficult time.