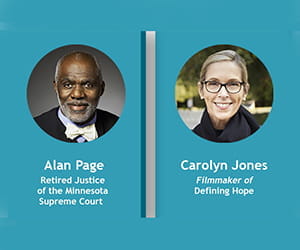 Minneapolis—July 12, 2018—Justice Alan Page, the first African American to serve on the Minnesota Supreme Court, will be the keynote speaker at Walden University’s 60th Commencement Ceremony on Saturday, July 28, 2018 in Minneapolis, Minnesota. Additionally, award-winning filmmaker and photographer Carolyn Jones, who specializes in telling stories that shed light on issues of global concern, will be the featured speaker for Walden’s nursing ceremony.

“Justice Alan Page and Carolyn Jones have stellar career achievements in championing various social change initiatives, which is at the core of Walden University’s mission and our graduates’ aspirations,” says Dr. Ward Ulmer, interim president of Walden University. “We’re delighted to have them as our 2018 summer keynote speakers, as their dedication and passion serve as an inspiration for all of us to effect positive social change in our local communities and abroad.”

Justice Alan Page
Previously working as an attorney in the Office of the Minnesota Attorney General for seven years, Justice Page served on the state Supreme Court from 1993 to 2015, until he reached the mandatory retirement age of 70. Justice Page was the only justice ever to join the court initially through election and became the biggest vote-getter in Minnesota history when he was re-elected in 1998.

While earning his law degree, Justice Page had a successful career playing in the National Football League (NFL) for the Minnesota Vikings and Chicago Bears. He was voted to nine consecutive Pro Bowls, earned All-Pro honors six times and was named the NFL’s Most Valuable Player (MVP), becoming only the second defensive player in history to be named MVP. In 1988, Justice Page was inducted into the Pro Football Hall of Fame.

Also in 1988, Justice Page and his wife, Diane, founded the Page Education Foundation, which assists students of color in their pursuit of postsecondary education. To date, the foundation has awarded over $14 million in grants to more than 6,750 individuals.

“Education can have a profound effect on an individual’s life, which in turn motivates them to positively change the people and environment around them,” says Justice Page. “I’m honored to be speaking to the next graduating class at Walden University and look forward to seeing their successes in the pursuit for social change.”

Carolyn Jones
Throughout her career, Carolyn Jones has been devoted to celebrating invisible populations and breaking down barriers. Some of her career highlights include showcasing people “living positively” with AIDS, female artists supporting entire communities and nurses on the front lines of our healthcare system.

Her most widely acclaimed books include Living Proof: Courage in the Face of AIDS and The American Nurse, which led to a feature documentary included in the U.S. Department of State’s American Film Showcase. Her newest documentary, Defining Hope, is currently being broadcast on PBS stations nationwide and represents the culmination of a journey investigating how to make better end-of-life choices.

“It’s important to recognize the critical work nurses are doing each and every day,” says Jones. “Walden University’s nursing graduates have social change fueling their passion, which will have a great effect towards improving patient care and the healthcare system as a whole.”

The Walden University community honors its graduating students twice a year at summer and winter commencement ceremonies. On July 28, 2018, Walden’s graduation will begin with the Doctoral Hooding Ceremony at 8:30 a.m. CT, followed by the School of Nursing ceremony at 12 p.m. CT and the master's, bachelor's and specialist ceremony at 3:30 p.m. CT. The ceremony and keynote speakers can be viewed live via webcast at WaldenU.edu.

About Walden University
For more than 45 years, Walden University has supported working professionals in achieving their academic goals and making a greater impact in their professions and their communities. Students from all 50 states in the U.S. and more than 150 countries are pursuing their bachelor’s, master’s or doctoral degrees online at Walden. The university offers more than 80 degree programs with more than 400 specializations and concentrations. Walden University is accredited by The Higher Learning Commission, hlcommission.org. Walden is one of more than 70 institutions in 25 countries that make up the Laureate International Universities network. For more information about Walden, visit WaldenU.edu.