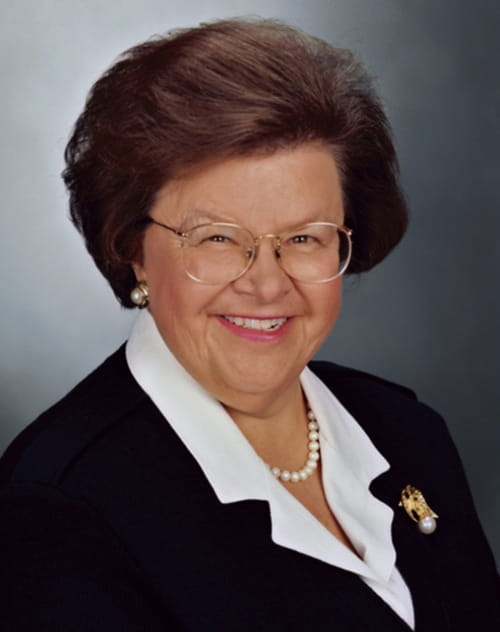 Minneapolis—July 3, 2016—Former Senator Barbara Mikulski, the longest-serving woman in both the United States Senate and Congress in American history, will be the keynote speaker at Walden University’s 58th Commencement Ceremony on Saturday, July 15, 2017.

Senator Mikulski, a former social worker in Baltimore, spent four decades in Congress, representing her home state of Maryland. In 1986, she was the first woman elected to the U.S. Senate from Maryland, and in 2012 became the first female chair of the Senate Appropriations Committee. During her illustrious political career, Mikulski focused on the issues of civil rights, national security, space exploration, education, jobs, research and innovation, women's health, cyber security, seniors and veterans. She was the primary sponsor of the Lilly Ledbetter Fair Pay Act, addressing salary discrimination against women. Ledbetter spoke at Walden’s commencement in 2009.

When she retired, Senator Mikulski was the ranking minority member of the Senate Appropriations Committee. The longtime senator was also honored as a recipient of the Presidential Medal of Freedom by former President Barack Obama. Following her retirement from the U.S. Senate earlier this year, she accepted a position as Homewood Professor of Political Science at Johns Hopkins University. Senator Mikulski participates in national speaking engagements on the topics of leadership, innovation and women’s empowerment.

"Senator Barbara Mikulski is the definition of a public servant. She has devoted her life to championing the rights of every man, woman and child. She is a trailblazer, and we look forward to her sharing her experience as an original ‘social change agent’ with our graduates and guests at Walden’s commencement," said Jonathan Kaplan, president of Walden.

The Walden University community gathers to honor its graduating students twice a year at summer and winter commencement ceremonies. The 2017 summer commencement ceremony will be held at 10 a.m. Eastern time on July 15 at the Gaylord National Resort in National Harbor, Maryland. The ceremony and address can be viewed live via webcast at www.WaldenU.edu.

About Walden University
For more than 45 years, Walden University has supported working professionals in achieving their academic goals and making a greater impact in their professions and their communities. Students from all 50 states in the U.S. and more than 155 countries are pursuing their bachelor’s, master’s or doctoral degrees online at Walden. The university offers more than 85 degree programs with more than 435 specializations and concentrations. Walden University is accredited by The Higher Learning Commission, www.hlcommission.org. Walden is one of more than 70 institutions in 25 countries that comprise the Laureate International Universities network. For more information about Walden, visit www.WaldenU.edu.