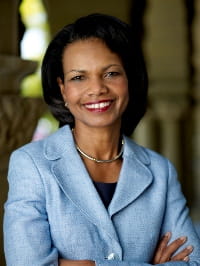 Minneapolis—July 8, 2014—Dr. Condoleezza Rice, former secretary of state, will be the keynote speaker at Walden University’s 52nd Commencement Ceremony, July 12, 2014. Dr. Rice also served as assistant to the president for national security affairs, the first woman to hold that job, and earlier as the provost of Stanford University.

“We are honored to have Dr. Rice share experiences from her distinguished career in public service, diplomacy and higher education with our graduates and guests,” said Dr. Cynthia G. Baum, president of Walden. “Her personal reflections on the tremendous transformational power of education, and the responsibilities that go with it, will certainly resonate with our Walden community members, who are committed to using their education to make a difference every day.”

As the 66th secretary of state of the United States under President George W. Bush, from January 2005–2009, Dr. Rice was the second woman and first African-American woman to hold the post. She is currently a professor of political economy in the Graduate School of Business at Stanford University, where she also is the Thomas and Barbara Stephenson Senior Fellow on Public Policy at the Hoover Institution and a professor of political science. She served as provost of Stanford from 1993–1999. Dr. Rice is a founding partner of the international strategic consulting firm RiceHadleyGates LLC.

She has authored and co-authored numerous books, including two best-sellers, No Higher Honor: A Memoir of My Years in Washington and Extraordinary, Ordinary People: A Memoir of Family. She is also the co-founder of the Center for a New Generation, an innovative after-school academic enrichment program for students in California that ultimately merged with the Boys & Girls Clubs of the Peninsula, where she maintains an active role.

The 2014 summer commencement ceremony and address can be viewed live via webcast at www.WaldenU.edu.

About Walden University
For more than 40 years, Walden University has supported working professionals in achieving their academic goals and making a greater impact in their professions and their communities. Today, more than 50,000 students from all 50 states and more than 150 countries are pursuing their bachelor’s, master’s or doctoral degrees online at Walden. The university provides students with an engaging educational experience that connects them with expert faculty and peers around the world. Walden is the flagship online university in the Laureate International Universities network—a global network of more than 75 campus-based and online universities in 29 countries.