2014 Todd Benson Scholarship for Leadership in Business and Management 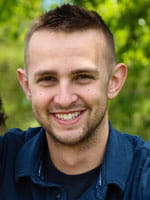 April 2014—Patrick Cleary was awarded Walden University’s 2014 Todd Benson Scholarship for Leadership in Business and Management for his strong business background. The BS in Business Administration student started as a general employee at Pudgie’s Pizza and Subs in Cortland, N.Y., before joining a small team to open a series of Five Guys stores in the New York area. His role as shift manager required him to hire and manage crews, ultimately training the on-site staff to accept full responsibility for each store.

“I led the opening of five stores in a two-year period,” Cleary explains. “I helped hire about two dozen people at each store and was part of the training process at each location.” He helped promote a new team of managers before leaving to open a new store.

In 2011 he rejoined Pudgie’s, this time as head manager at its new location in Syracuse. Today, he’s in charge of all day-to-day operations, including accounting, hiring, ordering, and problem-solving. “When something goes wrong, you adjust quickly. I’m always on my toes,” he says.

After completing his bachelor’s at Walden, Cleary’s goal is ultimately to develop and launch his own business. “It might be a pizza shop, but we’ll see what the market dictates,” he says. “I’ll see what people like and capitalize on that. I look at everything as an opportunity.”

About the Todd Benson Scholarship for Leadership in Business and Management
The scholarship is named in honor of Todd Benson, a former Laureate Education, Inc. board member, in recognition of his contributions to the growth, expansion, and success of Laureate Education. This scholarship award is open to new students enrolling in an undergraduate program within the College of Management and Technology and is awarded to a student who demonstrates the potential to excel as a business leader.

Read about the Todd Benson Scholarship for Leadership in Business and Management.