Minneapolis—June 25, 2013—Paul Rusesabagina, founder of the Hotel Rwanda Rusesabagina Foundation, will be the keynote speaker at Walden University’s 50th Commencement Ceremony on Saturday, Aug. 17, 2013, at 1:30 p.m. Central time at the Minneapolis Convention Center. 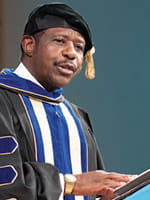 Rusesabagina was a hotel manager turned hero for more than 1,200 people seeking refuge during the Rwandan genocide in 1994. His personal mission to teach the lessons of Rwanda has grown into an international movement of social justice and human rights activism.

“Paul Rusesabagina’s powerful voice and unwavering commitment to raise awareness and prevent genocide throughout the world is truly awe-inspiring,” said Dr. Cynthia G. Baum, president of Walden University. “It’s an honor to have Mr. Rusesabagina share his inspirational and important message of social change with our graduates and their families during Walden’s 50th Commencement, where we celebrate scholars committed to leveraging knowledge to address challenges in their communities, professions and the world around them.”

Over the course of 100 days in 1994, an estimated 800,000 people were killed in the Rwandan genocide. As he watched his country descend into madness, Paul Rusesabagina, manager of a luxury hotel in Kigali, risked his life to save the lives of more than 1,200 desperate refugees from certain death. Rusesabagina’s wrenching story is chronicled in the critically acclaimed 2004 film Hotel Rwanda and in his 2006 autobiography, An Ordinary Man.

The 2013 summer commencement ceremony, including Paul Rusesabagina’s address, can be viewed live via webcast at www.WaldenU.edu.

About Walden University
For more than 40 years, Walden University has supported working professionals in achieving their academic goals and making a greater impact in their professions and their communities. Today, more than 50,000 students from all 50 states and more than 145 countries are pursuing their bachelor’s, master’s or doctoral degrees online at Walden. The university provides students with an engaging educational experience that connects them with expert faculty and peers around the world. Walden is the flagship online university in the Laureate International Universities network—a global network of 70 campus-based and online universities in 29 countries.