Minneapolis—July 12, 2012—Social entrepreneur Asher Hasan, MD, MBA, will speak to more than 650 doctoral students at Walden University’s academic residency on July 18 at the Ted Mann Concert Hall in Minneapolis. Dr. Hasan is the founder and CEO of Naya Jeevan, a nonprofit social enterprise organization that partners with large multinational companies to provide integrated health insurance to low-income families throughout the emerging world. 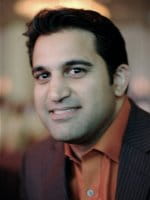 Dr. Hasan conceived the award-winning business plan for Naya Jeevan, or “new life,” while he was pursuing his MBA at New York University’s (NYU) Stern School of Business. Through his training as a general surgeon and his brief career in the pharmaceutical and biotech industries, Dr. Hasan was able to achieve professional and material success at an early age. However, he knew he had much more to contribute to the world. From this desire to do more came the genesis of Naya Jeevan, which went on to receive the $75,000 first prize in NYU’s Social Entrepreneurship Business Plan Competition.

Often referred to as “the first HMO for the marginalized in the emerging world,” Naya Jeevan partners with large, multinational companies to provide integrated health insurance to workers who make less than $6 a day. Initially focused on empowering the working poor in developing nations, Naya Jeevan also dedicates significant efforts toward aiding survivors of natural disasters, such as those internally displaced by the 2010 floods in Pakistan. Naya Jeevan is currently operating in the United States and Pakistan with plans to replicate its social business model on five continents.

Dr. Hasan was recently elected to serve on the World Economic Forum’s Global Agenda Council on Social Innovation for 2012–2014 and recognized by the Schwab Foundation as a 2011 Asia Social Entrepreneur of the Year. He was a 2009 and 2010 member of the Clinton Global Initiative, a 2009 TED India Fellow, a 2010 Ashoka U.S. Fellow, a 2011 Ariane de Rothschild Fellow and a Draper Richards Social Entrepreneur Fellow for 2009–2011.

Academic residencies at Walden, an accredited online university, support students’ academic and professional goals by connecting them with faculty mentors and diverse groups of peers to encourage the vibrant exchange of ideas and perspectives. During residencies, students from select doctoral and master’s programs have the opportunity to conceptualize and develop research initiatives that contribute to positive social change.

Walden’s plenary sessions are an integral part of the residency experience and feature speakers from around the world who share their stories and viewpoints with the hope of inspiring debate and lively conversation. These sessions are intended to provide Walden students, faculty and staff members with the opportunity to hear perspectives on a variety of topics that are meaningful and relevant to their lives as scholars and practitioners.