Minneapolis—May 17, 2012—Dr. Óscar Arias Sánchez, former president of Costa Rica and 1987 Nobel Peace Prize Laureate, will be the keynote speaker at Walden University’s 48th Commencement on Saturday, Aug. 25, 2012, in Minneapolis. Championing issues such as human development, democracy and demilitarization, Dr. Arias has traveled worldwide spreading a message of peace and applying the lessons learned from the Central American peace process to topics of current global debate. 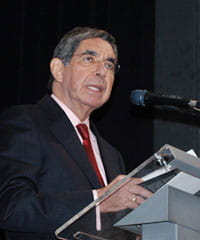 “We are honored to have Óscar Arias Sánchez, an international ambassador of peace and democracy, as our commencement speaker. He shares Walden’s mission to advance positive social change in communities around the world, and we look forward to the inspiring message he will share with our graduates,” said Dr. Cynthia Baum, president of Walden.

Born in San Jose, Costa Rica, in 1940, Dr. Arias was elected president of Costa Rica in 1986. In office, he began an active campaign for democracy and peace for the countries of the region. He drafted the Arias Peace Plan, an initiative that culminated in the signing of the Esquipulas II Accords, or the Procedure to Establish a Firm and Lasting Peace in Central America, by five Central American presidents on Aug. 7, 1987. That same year, he was awarded the Nobel Peace Prize, and a year later, he used the monetary award to establish the Arias Foundation for Peace and Human Progress.

In 2006, Dr. Arias was once again elected president of Costa Rica. During his second presidency, Dr. Arias continued his mission to foster peace in the regions through campaigns that advocated worldwide disarmament and regional free trade. He also worked to help restore order in nearby Honduras and promoted global improvement on environmental issues.

Dr. Arias has received more than 70 honorary doctorates from colleges and universities. He has also been awarded numerous prizes, including the Martin Luther King Jr. Peace Award, the Liberty Medal of Philadelphia, the Jackson H. Ralston Prize, the Prince of Asturias Award, the Albert Schweitzer Humanitarian Award and the Americas Award. Dr. Arias actively participates in several international organizations and serves on the boards of directors for the International Centre for Human Rights and Democratic Development (ICHRDD), Economists Allied for Arms Reduction (ECAAR), the International Negotiation Network of the Carter Center and the Peres Center for Peace, among others.

The commencement ceremony will be held Saturday, Aug. 25, at 1:30 p.m. Central time at the Minneapolis Convention Center. The ceremony, including Dr. Arias’ address, can be viewed live at www.WaldenU.edu.