Minneapolis—January 31, 2011—Greg Mortenson, an acclaimed education advocate and author of the 2007 New York Times best-seller Three Cups of Tea: One Man’s Mission to Promote Peace…One School at a Time, praised Walden University at its 45th commencement ceremony for its commitment to positive social change. 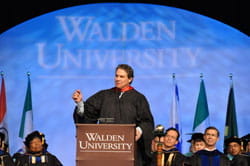 Speaking to graduates at Walden’s 2011 Winter Commencement in Miami, Mortenson said, “As all of you know, Walden University is about service, about community service and about planting seeds of inspiration. That’s what you are going to go out and do.”

Mortenson cited a U.S. News & World Report study that said in 1970, about 30 percent of the college graduates surveyed wanted to improve the world. “Today, 50 percent of nationwide college graduates say, ‘I want to go out and make my community, or my country, or the world a better place,’” he continued. “But here in Walden it is much higher than that—it is about 75 percent or 80 percent.”

Describing the Walden community’s deeply rooted commitment to helping others, Mortenson acknowledged some of Walden’s social change initiatives, including Scholars of Change and Global Day of Service, as well as several Walden students and alumni who are making a positive difference in their communities in this country and around the world.

“It is not only about helping others, but it is also about thinking of ourselves as a collective community. And in Walden’s unique environment, you really are able to foster that,” he said. “Your hearts have already spoken to you, and you’ve taken good notes. So, go out there now and change the world and make it a better place.”

Walden honored Mortenson with the Presidential Award for Leadership in Social Change, which is presented to an individual who makes a profound impact by effecting positive social change in his or her local community, the nation or around the world.

About Walden University
For 40 years, Walden University has supported working professionals in achieving their academic goals and making a greater impact in their professions and their communities. Today, more than 42,500 students from all 50 states and more than 100 countries are pursuing their bachelor’s, master’s or doctoral degrees at Walden. The university provides students with an engaging educational experience that connects them with expert faculty and peers around the world. Walden is the flagship online university in the Laureate International Universities network—a global network of more than 50 online and campus-based universities in 24 countries.