Robert Runk, an MS in Education graduate, was named the Baltimore County Public Schools Teacher of the Year to celebrate his work in mentoring and advocating for students.

A father, soccer coach and martial arts instructor, Robert Runk was asked often if he was a teacher. People recognized his natural ability to teach children, so he began to think seriously about a career working with students. About 20 years ago, he decided to leave his successful electronics job and make the leap to education. It was one of the most fulfilling decisions of his life. 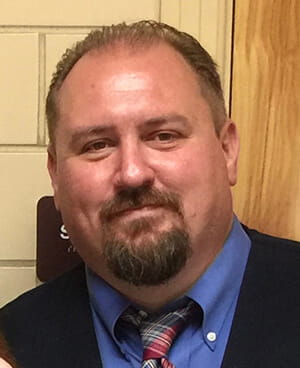 Starting as a substitute teacher at Parkville Middle School in Baltimore, Maryland, Runk began working with social-emotional learners (SEL), or diploma-bound children with an emotional or learning disability. He enjoyed educating these students and found he was able to make meaningful connections with them, leading him to teach full-time history and science to SEL students.

Runk noticed that his young male learners could benefit from mentorship to further support their diverse needs. He created a “Mentor Homeroom” with a group of 20 eighth-grade boys to provide an added level of encouragement. Following the early success of the program, he expanded it to sixth- and seventh-grade boys and eighth-grade girls. Despite a shift to online learning due to the coronavirus pandemic, Runk continues his Mentor Homeroom initiative in a virtual environment.

“The Mentor Homeroom was created to be a community within the school,” says Runk, a Walden University MS in Education graduate. “Many of these students struggle in different ways, including academically, emotionally or with difficult home situations.”

During the Mentor Homeroom meetings, Runk and the students work on organization, tutoring, problem resolution and reflection. Members of the community also help each other make progress toward their goals, while Runk focuses on each student’s overall aspirations. He identifies avenues that work best for each child, rather than norms that have been placed on them.

Because of his dedication and holistic care for his students, Runk was named the Baltimore County Public Schools 2020 Teacher of the Year. He is the first instructor at his school to receive this designation and was a finalist for the 2020-2021 Maryland Teacher of the Year award.

“I love the classroom, even if it’s virtual,” says Runk. “I think that’s where the major changes happen in school. By being accessible to the kids every day, I give them stability that some wouldn’t otherwise have.”

The real reward for Runk is seeing the positive evolution of students who previously had difficulties in and outside of in-person and online classrooms. He sees a bit of progress every day, as the children improve their grades and are referred less often for discipline. Many of his former students have earned college scholarships and went on to become successful in the workplace.

“One young man came to me in seventh grade who wouldn’t do his work and was cursing at students and teachers,” says Runk. “We worked together individually and in the Mentor Homeroom. By the end of eighth grade, he was passing classes, doing great academically, playing sports and behaving respectfully. To me, seeing students succeed is what makes the difference.”

Transitioning to virtual instruction due to COVID-19 was challenging at first for his mentor teams. In addition to scheduled classes and calls over the summer, Runk ensured he could be contacted almost any time and helped students daily with educational and personal challenges.

“The most important thing is to create normalcy by concentrating on learning and focusing on the kids’ emotional health,” says Runk. “I’ve never seen anything like this in my lifetime, and I hope my students never will again.”

Runk has put several of the skills he learned at Walden to work. His experiences as an online student and his knowledge of technology practices helped him to teach remotely over the past year. He also credits Walden with enhancing his leadership abilities. He hosted several educational sessions for his colleagues to share best practices in working with at-risk students. One included introducing his coworkers to the power of student mentorship by partnering with the Maryland MENTOR program.

“I’m now willing to take on more prominent roles,” says Runk. “I’ve shared with the school community interesting information, including how brain function contributes to the reasons at-risk kids act out. I thought that session was amazing.”

He also feels more empowered to tackle social issues with his students. He encourages them to make their voices heard, knowing they will make a positive impact.

“The one underlying thing I saw with every class I took at Walden was making positive social change,” says Runk. “I loved how I could take what I learned in class and make changes in my career. I could make those connections with the at-risk students I work with.”

Runk is even considering teaching in online higher education courses, combining his experience at Walden with new lessons learned from instructing his students virtually during the school year.

“One of the best choices I’ve ever made was going to Walden for my MS in Education program,” says Runk. “I’ve gained so much while I was taking classes there. I’ve learned so much to further my life.”