The PhD in Management graduate and sergeant major in the U.S. Marine Corps examines generational differences of young Marines and their level of commitment. 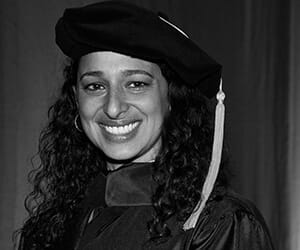 Honor. Courage. Commitment. These are the core values of the United States Marine Corps (USMC), which has inspired men and women to lead and defend on and off the battlefield since 1775.

More than 220 years later, a 17-year-old girl from New York wondered if she had the maturity to attend college after graduating from high school a year early or if the USMC was a better fit.

During this time, a USMC recruiter visited her high school, and she asked him to stop by her house to speak with her mom. Friends of Dr. Yassa-Lopez had learned she was considering joining the military and tried to talk her out of it; instead, their efforts convinced her. Her mother, Sonya Yassa, signed the permission form since her daughter was a minor, and Dr. Yassa-Lopez was in boot camp one month after turning 17.

Enlisted Marines like Dr. Yassa-Lopez make up the majority of the USMC and rank from private up to sergeant major. The remaining Marine population are officers who lead Marines, and they rank from second-lieutenant to four-star general. The officers, Dr. Yassa-Lopez explains, are the decision makers who plan, decide, and pass down expectations. Those on the enlisted side are the executors acting on those orders.

Dr. Yassa-Lopez started as an E-1 private and worked her way up through the ranks to become a sergeant major in 2015, just 19 years after joining the USMC. On average, she says, Marines typically are selected to become a sergeant major after 20 to 23 years of service. As a sergeant major, she is senior in ranking on the enlisted side and is responsible for all personnel matters, including helping to guide her Marines’ professional and personal lives. She also advises her commanding officer on legal, ethical, or personnel management issues and sometimes planning and operations.

“In the civilian world, my job is comparable to human resources,” explains Dr. Yassa-Lopez. “I am accessible to all Marines in my current unit, which is now just over 100, and my phone constantly rings day and night.”

Leadership is at the core of Dr. Yassa-Lopez’s job and her identity as a Marine, and she feels Walden University’s Leadership and Organizational Change specialization was a natural fit. Marines learn to master 14 distinct leadership traits as part of their training. Though it may seem like management to civilians, she explains that everything she does falls under leadership.

She initially wanted to focus her dissertation topic on women in senior leadership positions. She has seen a lot of change within the USMC since enlisting, especially when it comes to women’s roles. For example, women were not allowed to serve in combat, nor were they allowed on ships with the Navy during the 1990s. However, while deployed in Afghanistan in 2014, her interest in the topic shifted.

“I was reflecting on how leadership didn’t understand my generation when I first joined the Marine Corps, and, as I’ve matured, my peers are making the same comments about younger Marines,” says Dr. Yassa-Lopez. “They were saying the younger generation is different than others; that they didn’t care.”

She admits that some of the things privates did would baffle her, including watching YouTube videos and trying to recreate them. Still, she found it hard to believe that those of a younger generation who voluntarily join a military branch don’t have the same dedication or qualities as their predecessors.

In 1883, the USMC adopted its Semper Fidelis (or “Always Faithful”) motto. Marines are taught “once a Marine, always a Marine.” Dr. Yassa-Lopez wanted to understand why some younger Marines wanted to take off their uniform when they got home at 17:00 and forget they were a Marine until 06:00.

In her dissertation, Generational Differences in the Level of Commitment in the U.S. Marine Corps, she examines the continuance, affective, and normative commitment of Generation Y compared to Generation X Marines. Her findings reveal similarities in continuance commitment, meaning Marines choose to stay and serve for many reasons, but a paycheck isn’t one of them.

“I’ve stayed so long because I love what I do, and it was the best decision I could make for my son as a single mother,” says Dr. Yassa-Lopez.

Though there were slight differences in normative commitment, both generations displayed an emotional attachment to the organization. That, she says, goes back to the culture: Marines are family and take care of one another no matter where they are in the world.

The generations diverged at affective commitment—the obligation a Marine feels toward the organization. Generation Y is undecided. She says it’s not that they don’t feel an obligation, but that they don’t necessarily feel one yet. The older Generation X Marines, on the other hand, feel an obligation to the USMC. Dr. Yassa-Lopez believes a future study could explore if time of service has an impact on normative commitment.

The data also uncovered gender differences among the generations.

“Female Marines had a lower level of affective commitment than their male counterparts, which is something I’d like to dig more into in the future.”

Soon, Dr. Yassa-Lopez will have time to do further research. She anticipates remaining an active-duty Marine for another three to four years and then going on to teach at the university level. In the meantime, she’ll be focusing on publishing a paper based on her research.