A Positive Influence for an Impoverished Community

Davion Mauldin, an MS in Human and Social Services student and medical social worker, helps the homeless on Skid Row and children in Compton, California. 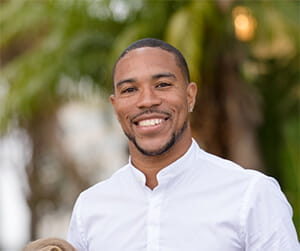 Los Angeles County is home to celebrities and entertainment titans in Hollywood, but it also includes Skid Row, a densely populated area in downtown LA where homeless people live. More than 52,000 Californians are homeless in LA County, including over 25% who live in their cars.

“Downtown Los Angeles is a crazy sight to see because it’s full of high-rise buildings, big businesses and millionaires, yet thousands of homeless people are living on the streets right outside their doors,” explains Davion Mauldin, an MS in Human and Social Services student.

Mauldin has visited Skid Row for two years to provide lunches for the homeless, feeding more than 4,000 people. Typically, the brown bag lunches Mauldin and his team of volunteers hand out include five items: a sandwich, bottle of water, salty snack, sweet snack and piece fruit. He has also coordinated several clothing drives for children and adults through his nonprofit organization, Doing All Honorable (DAH) Services.

He says a lot of people on Skid Row are used to receiving help or donations in some way. Some donors park their cars and hand out items directly from their trunks and leave, but Mauldin and his volunteers prefer to set up tables so they can better engage with the homeless community. 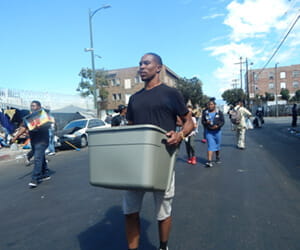 “They know what to do when they see our tables and start lining up in an orderly fashion,” says Mauldin. “Not only are we able to provide them with much-needed food and clothing, but we’re able to talk with them and show we care. They are very appreciative of our support.”

DAH Services coordinates donation events multiple times a year. When he first started, it was just Mauldin and his six board members. Soon after, his volunteer base grew to 40 and then upwards of 60 community members, including family, friends, church congregants and students seeking community service hours.

In honor of his 30th birthday, which coincided with Walden’s 13th annual Global Days of Service in 2018, Mauldin decided to create hygiene kits for the homeless that included soaps, sanitary wipes, lotions, feminine pads, combs, brushes, toothbrushes, toothpaste and more. Donations came pouring in from all over the country, including Southern California, Las Vegas, Phoenix, Denver, Miami and San Francisco.

“I wanted to give back alongside the people who have supported me building this nonprofit organization,” says Mauldin. “It was amazing to have so many people from around the country contribute to an initiative that means so much to me.” 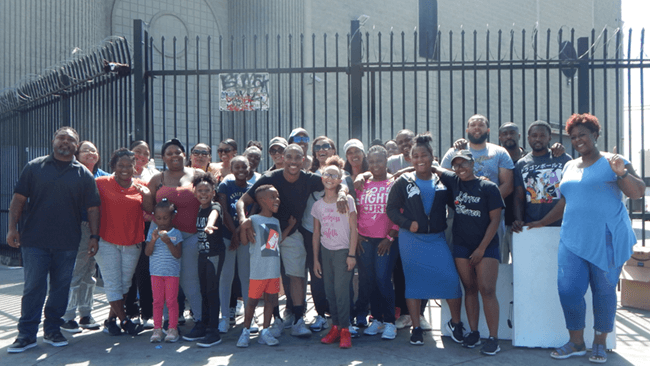 Born in Compton, California, a city notorious for high poverty and crime rates, Mauldin says his family always taught him to help others in any way possible. He started DAH Services in January 2017 after having a bad week while working at the Orange County Social Services Agency. Mauldin had been working with youth from Compton when he started to internalize their problems and wanted to find a different way to help.

“I was lucky because I could go home, but these kids were incarcerated with it all,” recalls Mauldin.

When he was in the 10th grade, Mauldin’s mom moved the family to Las Vegas. That was when he realized gunshots on a nightly basis, funerals for preschoolers, adolescent deaths and drugs everywhere were not normal.

“You don’t have to participate in it to be harmed by it,” says Mauldin.

After completing high school, Mauldin received a scholarship to play football at the University of North Dakota. The culture shock and difficult transition sent Mauldin back to California, where he attended Cerritos College, just 20 minutes away from Compton. Mauldin then transferred to San Diego State University, where he played cornerback for the Aztecs.

Getting out of Compton shaped how he viewed the world. Because Mauldin played Division I football, he was able to travel across the country and see how other people lived. His experience also afforded him friendships with teammates and classmates who helped change his perspective and continue to support him to this day.

Mauldin currently works as a medical social worker in LA and Orange Counties, where more than 95% of the clientele consists of impoverished families and homeless individuals. After looking around his community to see what kind of degree people have in the job he wanted to pursue, Mauldin decided it was time to earn a master’s degree.

“Walden’s commitment to social change and the online MS in Human and Social Services program were the right fit for me because I have a household to take care of and only so many hours a week for my full-time job and an internship,” says the father of three.

After he earns his master’s, Mauldin plans to apply to an organization that provides early education, behavioral health and family strengthening services to children and families impacted by persistent poverty and stress.

“My drive to fill the need in my community comes from the positive influences I had when I was younger,” says Mauldin. “I want to be a positive influence on my own kids and selflessly serve children and families affected by poverty.”