Dr. Walter McCollum, dean of student affairs, journeyed to Haiti to build a primary school and change lives for generations to come. 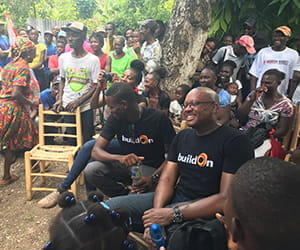 Two years ago, Walden’s Dean of Student Affairs Dr. Walter McCollum announced he wanted to build a school in Haiti. In October 2018, he broke ground on that primary school in the department of Nippes, which is about 4 hours from Haiti’s capital, Port-au-Prince.

Social change is very personal to Dr. McCollum, who has been working on missions in different countries for more than 30 years. His international development work has taken him from the Philippines and Turkey to South Africa and Costa Rica. After the earthquake devastated Haiti in 2010, Dr. McCollum visited the poorest country in the Western Hemisphere and made a life-long commitment to support Haiti.

“I was intrigued by the culture and people,” says Dr. McCollum. “Haiti is such a beautiful country with kind, resilient, and tenacious people. I will be in Haiti for the rest of my life.”

He has worked on projects with the Ministry of National Education and Quisqueya University over the past 8 years and visits the island at least 3 times a year. His recent project was funded through the Walter McCollum Education Foundation wherein he donated more than $35,000 and partnered with buildOn, an organization that has built 146 schools in Haiti so far. The school Dr. McCollum helped build, Number 147, is different from all the others.

He says, historically, the teams of people who travel to Haiti to build schools are either Caucasian or from another ethnicity but not Black American or Haitian American. Dr. McCollum, however, believed it was critical for locals to see their own leading, motivating, supporting, and building in their community. His team was comprised of seven young Haitian men ages 18–25 from his mentoring group, some of whom are international relations and electrical and mechanical engineering majors at Quisqueya University. Dr. McCollum emphasizes it’s important to volunteer because it builds character and brings out the greatness in people while helping to cultivate the spirit of servitude. 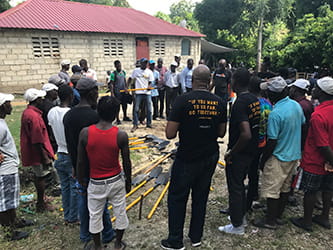 “All of these young men grew up in poverty on an island where it’s difficult to find food and where there is only a 60% literacy rate,” says Dr. McCollum. “It’s hard to acquire an education when you have to pay to go to primary school. Now, these young men are in college gaining a sense of accountability and leadership, aspiring to do something with their lives. They are also paying it forward in their community and providing opportunity for locals to see Haitians in a different light.”

The experience, he says, is like no other. Hundreds of people met the group with song and dance, proudly waiving the Haitian flag. They were then ushered to a location to sign a covenant. At least 125 people in the village must sign the covenant in order for the school building project to move forward. This shows the community is making a commitment to education and sustainability. Signatures included were Dr. McCollum, the mayor, and members of the community, many of whom could not read or write but simply dipped their thumbprint in ink to make their mark. Following remarks and children reciting poetry and singing songs, everyone proceeded to review the school’s blueprint with the engineers and builders before breaking ground. 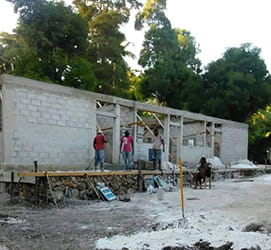 “This was one of the most exciting moments of my life, knowing that we were breaking ground for a primary school that will not only change the lives of children, but for parents and grandparents. We are changing lives for generations to come,” says Dr. McCollum.

Dr. McCollum believes cultural intelligence was vital to his foundation’s success because it’s a critical component of effecting positive social change. By experiencing various cultures through integrating yourself and gaining an understanding of the people, it can help change agents foster long-lasting relationships and serve others effectively. Though he had already been working in the country for 7 years and had personally experienced poverty, it took Dr. McCollum more than a year of visiting orphanages and working with politicians, the Ministry of National Education, and university officials to feel prepared to uplift the community and culture through this school.

“In order to achieve something like building a school, one must be passionate about increasing literacy, decreasing poverty, and advancing those who might never have access to education,” says Dr. McCollum. “My advice would be to connect your purpose with passion and get others to buy into your vision so they will travel the journey with you.”