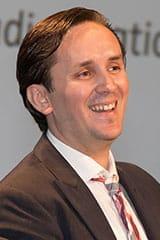 When Dr. Ardian Shajkovci—a research fellow at the International Center for the Study of Violent Extremism in Washington, D.C.—began his PhD in Public Policy and Administration at Walden University, he knew he wanted his research to produce actionable findings that could be applied to his work. He had no idea how challenging the process would be.

As a native of Kosovo who left in 2004 to pursue his education in the U.S., Dr. Shajkovci had witnessed his fair share of war and terrorism. In recent years, the Balkans have become a breeding ground for the radicalization of individuals and their indoctrination into extremist groups such as ISIS and those fighting in Iraq and the Syrian conflict. He was interested most in why people are motivated to leave these groups.

His dissertation, Radicalization and Safety and Security in the Balkans: An Ethnographic Study, addresses factors that prompt disengagement from terrorism. He says a lot of literature on terrorism tends to be highly sensational and that researchers often rely on open or secondary sources since it is difficult to get to direct sources because of safety and security concerns. Instead, he used ethnographic methods— qualitative research that combines immersive observation—and directed one-on-one interviews.

“I wanted to get on the ground and talk to people. Ethnographic methods are really powerful for researchers who want to get information firsthand,” he explains.

With this oft-considered taboo topic, however, securing sources and conducting interviews can be challenging. Here, the 2016 graduate whose work earned him the Harold L. Hodgkinson Award shares tips to help fellow doctoral students build relationships with sources who may be difficult to access:

Network, network, network. “It can be very difficult to go directly to the source,” says Dr. Shajkovci, who leveraged his ties in the Balkans and Kosovo even though he hadn’t been living in the region. “I relied on a lot of introductions. People who work in the system would introduce me,” he says of those in law enforcement and the judiciary. He also tapped former associates and colleagues, who connected him to credible sources. “There was also a snowball effect,” he reveals, as one person would often recommend another.

Prepare to travel. Although his study was a combination of on-the-ground interviews, phone conversations, and questionnaires, Dr. Shajkovci recommends being as close to your participants as possible. He traveled to Kosovo intermittently throughout his research to form stronger relationships with his sources.

Be cognizant of sources’ situations. For example, “When you talk to someone in intelligence or law enforcement, they tend to be more authoritative,” he says. It’s equally important to understand the sensitive situations your sources may put themselves in to participate in your study, and to learn as much about them or the topics you’d like to discuss through literature reviews so you know how to explore the limitations they may have. “I rely on preliminary information so I know the questions aren’t controversial or put someone in a dire position,” he explains.

Listen intently. Your sources are likely to share anything they can disclose. Listen carefully as themes start to emerge; they can create redundancies and force a reduction in sample size. It’s also important to listen to your committee members, who can help guide your research and writing. “We become very protective of our work, but we should let our egos go and listen to their feedback to get results” as the project progresses, he shares.

Reciprocate with your sources. “Once you publish, be professional and follow up” to share your dissertation, Dr. Shajkovci says. It can be a simple e-mail or phone call. “They want to know you appreciate their work and help. Let them know about your successes and failures. They may realize they can help you again.”

“This research has shaped me in so many ways,” he says. Not only has it influenced how he and his team conduct studies in his current work, but he has published his dissertation in peer-reviewed journals and is working to adapt and publish his findings in other journals. He also recently presented on behalf of the American Board for Certification in Homeland Security at the National Homeland Security Conference in Tampa, Florida.

“I want to disseminate my findings by publishing and presenting,” he continues. “At Walden, I learned not to generate knowledge simply to generate knowledge. It has to affect communities, on a small or large scale. I’m proud to say the topic I chose is shaping my whole life.”