Empowering the People of Belize 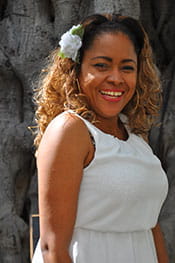 When Diana Shaw graduated from law school in Kingston, Jamaica, she never imagined she’d end up in Belize as a long-term resident. She also never imagined that she would go on to found a nonprofit that empowers community members to identify and address the factors that create vulnerability to sexual abuse and human trafficking.

When she began working as a litigator in Belize City in 1999, she knew she needed to start building relationships locally—and community service seemed like a natural place to start. The more she volunteered, the more she encountered people facing issues connected to child abuse and domestic violence who did not understand the legal system or how to access social services.

Shaw started by speaking at local churches, explaining how to access services and advocate for others. Soon after, nongovernmental organizations took notice and she was invited to join legal reform initiatives within the Belizean government. Through comprehensive research, she evaluated the child protection system, which revealed many policy gaps. Her recommendations were adopted, which led to the amendment of existing laws, as well as the implementation of new policies and procedures for local social service agencies, the police, and medical facilities.

Starting a Nonprofit to Positively Impact the Community

Over the years, Shaw realized that she could make a bigger impact by establishing her own organization, which led her to found the Child Development Foundation (CDF) in Belize in 2008. She started by building a staff of volunteers, primarily counselors and people who connected community members to local services.

The population Shaw targeted is the most underserved: families, particularly those headed by single mothers who may be struggling with issues such as poverty and domestic violence. In the last decade, the U.S. State Department has increasingly identified human trafficking as a growing social issue for Belize.

“Belize is vulnerable both to cross-border trafficking as well as domestic manifestations of human trafficking, but lacks essential services to provide comprehensive protection and rehabilitation of victims,” Shaw explains. “CDF offers sensitization and awareness training in schools, through local media, and for groups within the community.”

Many children and women who are referred to the CDF have experienced domestic violence, sexual abuse, rape, or human trafficking. Clients receive one-on-one and group counseling at its locations in Belize City and Belmopan to assist in their recovery. “Private therapy allows our clients to unearth trauma, discuss it with a professional, overcome it, and then truly begin working on their parenting skills in group counseling,” Shaw explains.

“We see a complete turnaround in the lives of women and in the lives of their children,” Shaw continues. “One mother reported that her child, who was known as a disruptive student, became a model student his classmates emulated—primarily because she changed her approach to parenting.”

Increasing Her Skills to Make Her Nonprofit Stronger

Although she saw many successes through the work of volunteers, and had begun hiring staff and receiving funding, Shaw knew she needed to run the nonprofit more effectively, which is why she chose to enroll in Walden University’s Master of Public Policy (MPP). She quickly found that each course applied to every facet of her work—and empowered her to do more, faster.

Most notably, a course on the principles of public policy led her to completely overhaul the CDF's budget, the processes it follows, and how frequently the budget is assessed. As a result of this hard work, in 2014 UNICEF improved the ranking of the organization in terms of project capacity and financial accountability, which allowed the organization to qualify for larger donations in the UN system, expand its Belize City office, and increase its programming.

Last year, after an invitation from the government of Belize, Shaw provided training for police, immigration staff, and social workers on the topic of violence against women to help eradicate human trafficking and commercial sexual exploitation. She also recently created new policies and procedures for the family court in Belize to better equip staff to protect children from exploitation and abuse. Her successes are the mark of many years of hard work.

Shaw is humbled by all she’s been able to accomplish with her Walden education. “Walden equips its graduates with the skills to become effective and successful social transformers in their communities,” the 2015 alumna says.

Shaw doesn’t plan to slow down any time soon. Her long-term goal? To earn her PhD. “My goal is to eventually work as a consultant to help other nonprofits assess their practices and help them become more efficient, not only in their outreach and staffing, but in how they build and assess their budget and pursue funding so that they can develop long-term sustainability. I want to continue to build a stronger Belize.” —Claire Blome