A Community of Support 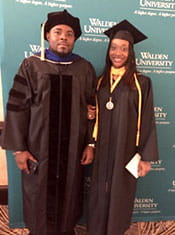 Dr. Wylie Tidwell III and his wife Kristin Tidwell of Georgia, are both recent graduates of Walden. Wylie earned his PhD in Public Policy and Administration and Kristin earned her BS in Communication in 2015. At commencement in January, they celebrated their accomplishments with their parents and extended family, not only by crossing the stage to receive their diplomas, but also by cutting it up on the dance floor.

There was good cause for merriment, as they each completed their degrees with two children under the age of 4 at home. Wylie is the program chair of general education at SAE Institute Atlanta and an adjunct faculty member at several universities, and Kristin is using her new degree to pursue a position in public relations.

Why did you choose to pursue a degree at Walden?

Wylie: I started Walden in 2010, right after finishing my master’s degree from Clark Atlanta University. I wanted an online program with regional accreditation, which is why I chose Walden. I had begun teaching and liked that the PhD in Public Policy and Administration program focused on law and policy, and would also contribute to my work as a professor by helping me develop my research skills.

Kristin: I was referred through Wylie. I was going to Kennesaw State University, but realized it would take me longer to complete a campus-based program. I did research and decided to join Walden as well. I want to begin a career in communications, ideally with a focus on the entertainment and music industry.

How did you support one another while earning your degrees?

Kristin: It was a lot to balance. One of us would have to pick up extra duties around the house and focus on our children. Sometimes it didn’t go as perfectly as we would have hoped, but we stuck together. My mom offered us breaks when we needed them. She would pick up the kids from school or take the kids on the weekends. Relying on one another, balancing our schedules, and having my mom really helped a lot.

Wylie: I was working as an adjunct faculty member early on in my program, so I would get my writing done before Kristin came home, which helped a lot. While I did the coursework component of my program, she wasn’t in school, so it counterbalanced. It was difficult toward the end while I worked on my dissertation and she had several courses to finish. We had to make time for each other.

What advice would you share with other students who are experiencing similar challenges?

Kristin: Definitely utilize the resources you have around you. For us, it was my mom. If you don’t have family, ask your friends. If you can take the time to go out with those friends occasionally, ask them to support you by babysitting when you need a few hours to study. Ask everyone in your life to help so you can get it done. It’s possible to have a lot going on and finish school, just as long as you have a “village” to help you.

Wylie: Remember why you chose to start the program. I pursued my PhD because when I was young, my parents always talked about me being a doctor. I wanted to complete it for them. Now, I know it will positively impact my career in higher education and as a researcher.

Kristin: Remember that “why” when you’re tired and you can keep going.