Beyond Borders: Go Tell It on the Mountain

It was 1988, and he was almost at the summit of the north face of Mount Everest in Tibet. “We had to turn back because of 100 mph winds,” says Dr. Steve Gardiner ’12, a Doctor of Education (EdD) graduate.

That was the first time Gardiner saw Tibet—and it wouldn’t soon leave his mind. In 1949, the Chinese military took over, and that occupation continues today. During that 1988 visit, Gardiner saw the area’s altered culture firsthand. The mountain is what drew the seasoned climber to Tibet, but the career high school English and journalism teacher—and 2008 Montana Teacher of the Year—couldn’t imagine leaving without seeing a school and learning about the people and the culture.

“The English teacher in a Tibetan school invited me to speak to his class,” Gardiner says. “When he introduced me, he said, ‘Comrades, we have a visitor today.’ I realized then that the occupation had been harsh, but the people were still so happy. That was a powerful experience.” 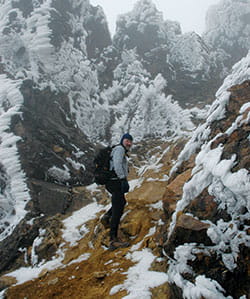 Gardiner would soon be drawn back to mountains around the world to tell others about it. In 2006, he was contacted by his friend John Jancik. The two climbers had met in 1995 while preparing for an expedition to northern Greenland and soon started doing other climbs together. Jancik wanted to combine his love of mountain climbing with his love for the spirit and culture of Tibet, and he wanted Gardiner involved.

The group they formed is called 50 for Tibet, a volunteer nonprofit effort to raise awareness of and funds for Tibetans by climbing the highest point in each of the 50 United States. Money raised by the project was donated through the Rowell Fund for Tibet, named in honor of photographer and mountain climber Galen Rowell and his wife, Barbara. The Rowell Fund provides grants to Tibetans involved in environmental, cultural, and women’s projects, many of which are reflective of the peaceful, happy nature of Tibetans.

“Fifty for Tibet spoke to me on many levels,” Gardiner says. “This opportunity to change lives and careers has allowed Tibetan artists to continue their work and make contributions to their communities through preservation of a Tibetan library, an outdoor education program for Tibetan students, a film about Tibetan music, and more.”

Over the next several years, Gardiner joined other climbers to conquer the highest points in 48 states—some as humble as the 345-foot Britton Hill in Florida; others as challenging as the 12,800-foot summit of Granite Peak in Montana. The group would later add international peaks to their list.

During many of his climbs, Gardiner was still working in the classroom and pursuing his own education. In 2012, he completed his doctorate, an educational journey that he says made his mission clearer.

“Many of the assignments in the EdD program emphasized cultural awareness,” he says. “I’d already been climbing for more than 30 years all around the world, but my experiences became even deeper and more meaningful.”

Now retired from teaching, Gardiner has more time to dedicate to his passion for mountain climbing and the people of Tibet. In July, he and Jancik published Highpointing for Tibet: A Journey Supporting the Rowell Fund, a book detailing their 50 for Tibet experiences. Gardiner plans to continue writing and publishing and climbing whatever mountains he can, whether for the experience or to tackle social change.

“What made my experience with 50 for Tibet such a perfect fit was that I took something I valued and tied it to a passion,” he says. “Find something you love, and use it to help others. Social change is sometimes that easy.”