Dr. Jonas Nguh ’13, ’11 was just a teenager when he immigrated to the United States from Cameroon, but he lived in Kob Village long enough to realize a troubling truth: Girls in his hometown had few options in adulthood aside from becoming mothers, but childbirth presented serious risks to their health. The World Health Organization estimates that about 830 women around the world die daily due to preventable pregnancy- or childbirth-related complications—and 99% of those deaths occur in developing countries.

“I had siblings and other family members who didn’t have access to maternal healthcare or who had negative impacts from what we in the West know are easily preventable illnesses,” Nguh says. “I said, ‘One day, I am going to study and come back and address all of this.’”

One day actually turned into several, as the PhD in Public Health and BS in Nursing graduate repeatedly returned to his native country in a service capacity. But the biggest victory for the Alumni Ambassador and 2013 Outstanding Alumni Award winner came in November 2016. That is when Nguh and several colleagues traveled to Kob Village to dedicate a maternal and infant health clinic. Nguh had saved $1,000 a month for 3 years to bankroll the building’s construction and secured grants and donations of equipment and vaccines to fill it. But it was his education—especially his doctorate from Walden—that provided the foundation for the clinic and its programs.

“I started as a bedside nurse, but as I continued my studies, I realized that I could teach and I could set up a clinic,” Nguh says. “I could provide that health education that was missing in my village.”

But he knew persuading Kob Village’s citizens to buy into new concepts such as vaccination—considered taboo in local customs—wasn’t going to be simple. Reflecting on what he’d learned in a Walden health communications course, Nguh developed an alternative way to send his message: theater.

“I had a small team, and we’d go to churches and community organizations,” Nguh says. “We had little skits that had morals like, ‘If I had taken this medicine, my baby would have lived.’ Or, ‘If my baby had gotten this shot, he wouldn’t have died.’” 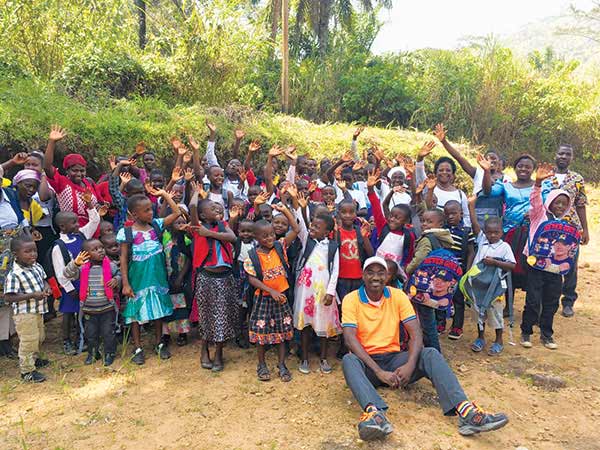 His approach bred excellent results. After the clinic opened in November, Nguh and his staff administered measles, mumps, and rubella vaccines to more than 200 children. Women from Kob Village and others nearby now come to the clinic twice a week to be seen by a nurse Nguh hired for the facility.

“Our goal is to expand the days we are open, and the bigger goal is to add other services—like cardiovascular and non-communicable disease care—when we can get more funding,” he says. Reflecting on all he’s achieved—the clinic’s construction, the vaccine program, and the buzz surrounding both—Nguh is understandably proud. But he emphasizes that it all started with the seed of an idea he honed as a Walden student.

“Walden taught me to think about the mission of everything I do—I want to reduce maternal and infant mortality— and develop my work from there,” he says. “Find your cause, and start small. Even if it’s just an hour a week. Once you get involved, areas of opportunity to create important social change will present themselves to you.”