Against All Odds in Pursuit of Education 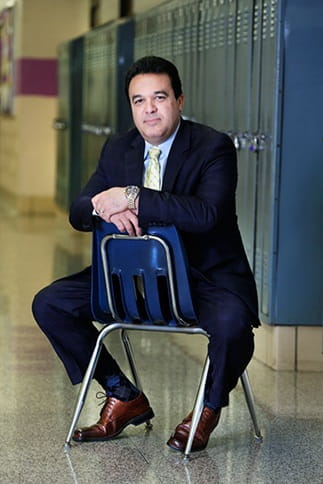 Most children, regardless of age, want to make their parents proud. And for children of immigrants to the United States, this desire can be even more acute. Expectations fueled by cultural, educational, and generational differences may lead to serious family conflicts over a child’s decision to pursue higher education. Walden PhD in Psychology and MS in Psychology graduate Dr. Eduardo Diaz ’15, ’10 often heard from his father: “If you have time to go to school, then you have time to go to work.”

Other children of immigrants have reported similar experiences. Dr. Angela Valdez ’12, a Doctor of Education (EdD) graduate born to a Korean mother and a Mexican-American father said that her decision to pursue higher education after high school confused her father, who thought it would be much better for her to get a job immediately. Fellow EdD graduate Dr. Edwin Quezada ’12, on the other hand, had a severe obstacle to pursuing any education in the United States at all: When he arrived in the U.S. from the Dominican Republic at the age of 16, he didn’t speak a word of English.

The journeys of these three Walden alumni not only reflect many of the common challenges for immigrant students but also provide apt lessons in perseverance, determination, and success.

What the numbers say—and don’t

In the United States, Hispanic communities have long struggled with barriers to education, including a high percentage of high school dropouts. But after decades of dismal statistics, there are finally some strong signs of improvement: The Hispanic high school dropout rate has decreased dramatically, from 32% in 2000 to 14% in 2013, according to the U.S. Census Bureau. College enrollment rates have also improved, with Pew Research reporting that the number of Hispanic students enrolling in two- or four-year colleges has tripled since 1993. With 2.2 million Hispanic students enrolling in college in 2013, Hispanics are now the largest minority group on U.S. college campuses.

However, what the statistics can’t show is how far a college degree goes after graduation. These effects don’t just help the graduate’s workplace, but the Hispanic community as a whole, according to Diaz, Quezada, and Valdez. As they found in their journeys to Walden and after, the impact is significant, if only to serve as an inspiration to all students of immigrant backgrounds facing challenges on the road to a higher education.

From super student to superintendent

Quezada’s journey to Walden began upon his arrival to the United States at the age of 16—he just didn’t know it yet. He came to the States from the Dominican Republic and entered his junior year at a Bronx, New York, high school barely speaking a word of English. A testament to his dedication and the support of his mother and school counselors, he managed to both learn the language and complete high school on time with the rest of his class just two years later. It was this monumental success that taught him an important life lesson that influenced his career choice: “I realized that when adults come together on behalf of children, wonderful possibilities open up.”

The following years saw Quezada climbing ever higher on the education ladder: master’s degrees in school counseling from Lehman College and school supervision and administration at Fordham University, and then 26 years of work in varying roles, including high school teacher, bilingual counselor, human relations facilitator, assistant principal, and principal for Bronx and Yonkers public schools. Eventually, he became the assistant and then deputy superintendent—and now, finally, he is head superintendent.

All this experience in education made Quezada thirsty for more. His good friend, colleague, and mentor, Dr. Angela Arias ’12, a graduate of Walden University, encouraged him to enroll in the Doctor of Education program, which he did in 2008. Like many students new to online classes, Quezada found that the Walden program was far more challenging than he anticipated. “I thought it was going to be easier than the face-to-face interaction because it would be on my own time; how wrong I was,” he remembers. “The program at Walden is so demanding and the expectations are so high that it was a challenge for me. A welcome challenge, but a challenge nonetheless.”

Thankfully, the self-discipline, work ethic, and adaptability Quezada had cultivated throughout his years in education helped him succeed in the EdD program. And then the lessons he learned from Walden paid off in his work afterward, particularly his commitment to basing decisions on research rather than personal opinion.

“Effectiveness is driven by what we’ve learned, and not by what we think will work,” Quezada explains. “I learned the meaning of educational discourse and the importance of staying focused on social justice.”

All these lessons are on display in his ongoing efforts to create “a fiscally responsible budget that will address the needs of the students I serve,” and his most ambitious goal of building a relationship with the international high school network. “I want to pilot an international high school for students who are new to the country, students who are coming here facing the same challenges I overcame,” he says.

Based on his own start in the U.S. as a teenager, Quezada understands that these students must not only master English, embrace a new culture, and quickly adapt to the fast pace of the educational system; they must appreciate America’s diversity. “New immigrants must understand the beauty of our differences,” Quezada says. “By understanding our differences, we discover common qualities that ultimately help us create a new and better society.” 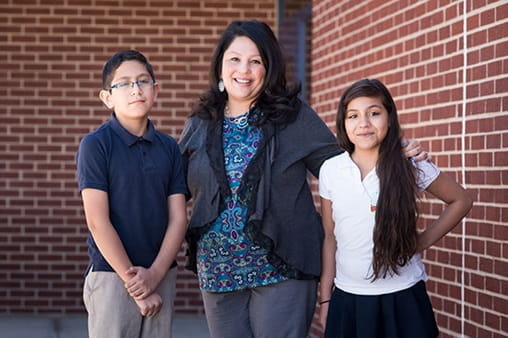 Dr. Angela Valdez
Photo credit: Theo Stroomer
Valdez arrived in the United States with limited English proficiency after spending the first three years of her life in Korea. Her mother insisted that she speak only English at home instead of her native Korean after Valdez’s ESL teachers shared that speaking two languages was only confusing her. Her parents valued education, but they considered a basic one enough: “When it came time for me to apply to college, my dad was confused about why I wanted to go to college rather than getting a job or joining the military in the footsteps of my father and grandfather.”

Originally, Valdez had no intention of going into education as a career, but a scholarship opportunity at the University of Northern Colorado led her to major in Spanish with an emphasis on bilingual education—and she hasn’t looked back since. She studied abroad in Mexico, earned a master’s degree in linguistically diverse education at the University of Colorado Boulder, and taught bilingual education for 7 years in Denver public schools.

Hoping to advance her skills even further and follow her passion at the same time, Valdez looked into studying at Walden for her doctorate. Being a single mother, she was attracted to the flexibility of online programs, albeit with some hesitations. “The Enrollment Specialist whom I spoke with addressed my concerns, explaining that Walden is accredited by the Higher Learning Commission, and that the doctoral program would be just as rigorous as a traditional brick-and-mortar school,” she recalls.

In the end, hearing success stories from others helped her make the decision to enroll. “Reading about the things alumni had achieved and what Walden meant to them spoke to me more than anything else,” she says.

Enrolling in the Doctor of Education program in 2007, she found her studies as challenging as she’d hoped. “The entire dissertation writing process was the most challenging—and the most rewarding—experience of my life,” Valdez remembers. After graduating, she immediately put her doctoral education to use at Pikes Peak Elementary in Harrison School District 2 in Colorado Springs, Colorado, where she is assistant principal.

Her overall goals center on young girls of minority backgrounds, especially since she herself graduated from the school district where she is now assistant principal. “I hope to inspire and empower our young girls to believe that they can do and be anything they are willing to work for,” she says. “I also want them to know that being bilingual is beautiful.” Although she can no longer speak her native Korean, she doesn’t want to see the same fate for the bilingual girls in her district.

But ultimately, she lets them know that achieving any success begins with finding self-motivation. “Be the positive change,” she encourages them. “Don’t wait for someone else to do it!”

Aiming for the stars 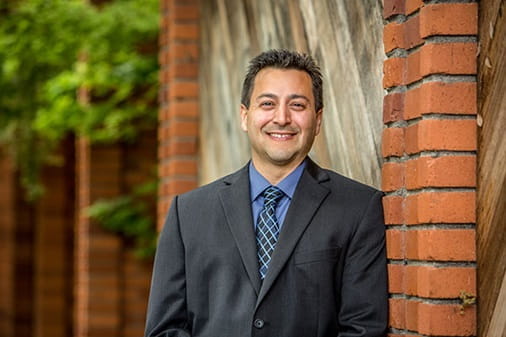 Diaz faced strong resistance to his pursuit of higher education. He realized while working three jobs after high school that he would need further education to advance professionally. However, his father believed hard labor was the only way to succeed. In fact, Diaz remembers that when one of his older brothers was accepted to the University of California, Berkeley, “My dad laughed and said he wouldn’t pay the tuition.”

It took a lot of determination to push through that discouragement, but Diaz gained admission to Santa Rosa Junior College, where he devoted himself to psychology and languages. It was there that he began learning American Sign Language (ASL), which was a particular inspiration for his continued studies. “ASL had an incredible impact on my understanding of the ways people interact,” Diaz says. “It helped me to better understand facial expressions and body language, and it has helped shape my pursuit of psychology.”

Later, Diaz continued his studies at Sonoma State University, earning a bachelor’s degree in psychology, which included a course in neuroscience and biological psychology. It was this study that formed the basis of his career in organizational and team development, including his current job at Alexan Consulting Enterprise Services (ACES). As director of talent acquisition and expert human factors scientist, Diaz “supports the development of teams by performing assessments that identify characteristics that influence team outcomes.”

Diaz enrolled in Walden’s PhD program in 2009 and earned his master's degree while completing his PhD. “What stood out to me about Walden was the number of educators who were involved in their passions while they were with Walden,” he says. “And the amount of opportunity for psychology was wonderful. It was all laid out there for me.”

It was in the doctoral coursework that he focused on his main area of interest and developed his role as expert human factors scientist. “After graduation, I took my dissertation research and applied it to developing an organizational team index, which is used to align candidates to specific teams and greatly improve team outcomes,” Diaz says.

With these skills grounded in research, Diaz proposed a lofty goal to his employer—doubling their current recruitment efforts—that he hoped to meet within 12 months. In just 3 months, he exceeded those goal expectations, earning him a permanent, full-time position.

More importantly, his success at Walden also helped heal deep wounds with his father. “After I earned my master's degree I showed my father the certificate, hoping for his approval,” Diaz recalls. “He held me in his arms and tears filled his eyes. I think that he finally understood that I would continue to pursue a higher education no matter the odds. I never gave up.”

It’s with this happy ending in mind that Diaz works hard to support and inspire his own children and others at The Space Station Museum in Novato, California. He volunteers to lead tours and on-site education for children K–12 and college students. “I hope that they are inspired to dream about the endless possibilities,” Diaz says, “and to apply their passion toward achieving their dreams.”