Stop yelling at your windshield—and give compassion a chance. Dr. David Solot looks at the big-picture impact of jumping to conclusions. 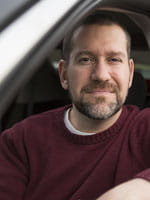 We’ve all been there: traffic is moving at a crawl on the highway. You have no idea why. And you are late. When you get to the source of the slowdown, you see that someone has been lollygagging in the left lane while talking on a cellphone. You resist the urge to scream as you pass by. Maybe you settle for giving the guy a serious glare. Inside you are seething. You’re likely assuming that the driver is an oblivious, inconsiderate imbecile.

“The natural reaction is to think, ‘This person is a jerk,’ ” says Dr. David Solot ’13, a PhD in Psychology graduate and director of client services at human resources consultancy Caliper. “We’re always looking at other people and trying to figure out why they do something, and we often assume they behave a certain way because it’s a hardwired part of their personalities.”

But maybe that slow driver is a dad who just got an emergency call from his wife that their daughter is badly hurt and heading to the hospital, so he’s worried and scared and trying to get to his family.

Jumping to conclusions about someone or failing to look at extenuating circumstances are examples of the fundamental attribution error, and it’s very common, says Solot, who has studied the phenomenon and written about it for CNN’s Eatocracy.

The error is particularly common in the United States, where the culture places a great emphasis on personal responsibility and quickly determining who is at fault, he says. “The fundamental attribution error lets you simplify things; you can simplify a situation to ‘he’s dumb’ or ‘he’s rude,’ ” Solot says. “We all do this to a certain extent. Nobody is immune.”

But if we can train ourselves to avoid these negative gut reactions—and rethink how we react to and treat other people—our society could be more compassionate, positive, and peaceful.

“A lot of prejudice and bigotry is based on making quick assumptions about people,” Solot says. “But those assumptions are mostly stories; they’re not based in fact.” Here, he offers a few ways to revise your own behavior:

BE AWARE. Accept that car accidents happen or your waiter may be stretched too thin to provide stellar customer service—and take note when you rush to judge someone. “If you know you’re doing it, you’ll have the ability to step back and wonder what you could do differently,” he says.

BE CURIOUS. Ask yourself why things are really happening. What are the alternative explanations for any given situation? Maybe there’s a really good reason why a driver is causing a traffic jam. Maybe your waiter is handling a raucous child’s birthday party in another room.

BE KINDER. Decide that the next time a driver cuts you off, you’ll stop and think first. Promise that the next time a waiter confuses your order, you’ll give him the benefit of the doubt. You can always make a different choice. Instead of assuming the worst, assume each person is trying their best.

“It’s easy to have that knee-jerk reaction; it’s harder to question your own conclusions,” Solot says. “But if we try, we may make the world a better place.”