Dr. Jonas Nguh ’13 shares how a commitment to volunteering can become an integral part of your everyday life. 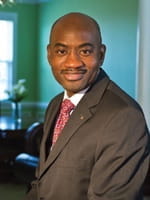 Some people look at the shoes in their closet and simply decide which pair to wear. When Dr. Jonas Nguh surveys his closet, he thinks about people who have no shoes. In 2010, a moment like this led him to start a program called “Soles for Souls.” He and members of his Maryland church collected shoes and sent more than 500 pairs to Africa.

Aha moments like this are normal for Nguh. While working as a registered nurse in a long-term care facility, he realized that some residents with developmental disabilities had no one to advocate for their needs. To fill that gap, in 2007, he founded the nonprofit Dove House Assisted Living in Baltimore. Today, it is a self-sustaining operation overseen by a board of directors.

“This is a vulnerable population. I saw people without family to look after them, and it broke my heart,” Nguh says. “Then I thought, ‘What could I do?’ I didn’t know the project would generate a lot of interest from the staff, but the nonprofit is really thriving. The seed I planted has grown beyond me.”

It’s a familiar pattern for the 2013 Outstanding Alumni Award recipient and 2011 Walden PhD in Public Health graduate. Nguh has made service and volunteering a regular part of his personal and professional life. When he sees a need, he acts.

That impulse prompted him to travel to Haiti after the 2010 earthquake to address basic sanitation issues in nursing and hospital settings. It also led him to involve students and faculty in community service when he became a university instructor, which resulted in his being named the 2012 national winner of a Nursing Excellence Award for volunteerism and service from Nurse.com.

Yet Nguh doesn’t view his behavior as extraordinary. Instead, he notes, “Volunteerism is passed generationally in my family. We were raised to appreciate the value of giving back to one another. Now it is just a part of our identity.”

In many ways, Nguh views his commitment to service as a response to his upbringing in the West African nation of Cameroon. When he was a child, he would accompany his father to a local hospital, where they distributed milk to new mothers.

“Back home, there was a very high infant mortality rate, and this small act made a big difference; mothers had milk for their children,” Nguh recalls. “My father always looked for opportunities to give back and make a difference. His values helped shape my work. I’ve also passed along the value of volunteerism to my kids. It’s just a part of our identity.”

Other family members have also influenced his life. “All three of my sisters became nurses,” Nguh explains. “When I was of college age, I was trying to find my path. My family directed me toward nursing, and I trusted their judgment. I’ve since developed a passion for nursing because you can work in bedside care, at the policy level, or in education.”

As a young man in his 20s with a recently completed bachelor’s degree in nursing from a school in Cameroon, Nguh immigrated to the United States to join family members in the Baltimore area. Their presence helped smooth his transition, but Nguh was aware that other immigrants were less fortunate.

“The difficulties I found were through the lived experiences of others. I looked at the lack of resources and knowledge. If you don’t have family here, you don’t know how to access healthcare or know what resources are available to you,” he recalls. “I never had to experience this, but I want to help others who have.”

At his church, where nearly every member was born outside the United States, Nguh originated the idea of inviting social workers, immigration attorneys, and other service providers to speak one Sunday each month. Once launched, the project grew. “It’s now become bigger than the original idea and proven that time and information can help make a difference in the community,” he says.

This work led him to found Community Leadership Inc. in 2005. The nonprofit helps immigrant women network with each other, access healthcare services, and become more educated. Once again, he saw his efforts make an impact. “When you empower women, you empower the family,” Nguh says.

Passing on a Passion for Volunteerism

Nguh also believes in empowering university students to serve community needs. When he turned his love of public speaking and knowledge of nursing into a new career as a nurse educator, teaching and volunteerism came together seamlessly.

“My students at the University of the District of Columbia had to take a community service practicum in public health, so I integrated service,” says Nguh. “I collaborated with churches in my community to organize a health fair. We served at a local homeless shelter and food pantry, too. Through this program, students completed their community service requirement and served the community.”

This first project set other projects in motion. “As we began to do more, the students and I had more and more ideas about what we could do,” he says. After reading about the plight of refugees displaced by civil wars in Africa, Nguh and his students started a fundraising campaign that ultimately provided $1.2 million for vaccines to fight communicable diseases. For another project, they collected soap from local hotels to send to Haiti after learning how even basic hand hygiene was difficult following the country’s devastating earthquake.

“Almost 90% of my students were adult learners coming into the nursing profession, and many were parents with full-time jobs,” Nguh explains. “That’s why we collaborated to come up with these projects. We had limited resources and time, so we chose things that were feasible. When service is integrated with your work and life, it just becomes what you do. You don’t think of it as something extra.”

Expanding His Reach by Earning a Doctorate

Nguh’s father’s lesson of service had become his own. Yet only when he earned his doctorate did he feel that he truly understood the significance of service, despite his many years of helping others.

“Before, I served out of habit, because my family did it. Now that my knowledge has expanded, I look at things from a broader perspective. My fulfillment comes from working for the good of the community,” he explains. “I love Walden’s mission of positive social change; it is so much of what I value. My joy is not just to have the diploma on the wall, but also to know that I have the capacity to make a difference.”

In the PhD program at Walden, he took leadership and management courses that have proved valuable as he’s moved from teaching into academic administration, first becoming the director of the nursing certificate program for the University of the District of Columbia Community College and then, in December 2012, the academic chair for the Bachelor of Science in Nursing program at Kaplan University.

“The program really built my knowledge base and my capacity to pursue research,” Nguh says. “It also helped me realize that if I keep doing what I believe in, it will make a difference in the long term.”

The positive experiences he had at Walden led him to return for a second degree. But the program he chose wasn’t the typical follow-up to a doctorate: In January 2013, Nguh completed a Bachelor of Science in Nursing (BSN) at the university. “I went to nursing school in Cameroon initially,” he explains. “It was challenging to verify my education when I applied for a job in the United States. It could take up to three months to get my records. Now, I have all of my educational credentials in one country.”

Nguh plans to continue to add to his credentials by pursuing a third degree at Walden, a Doctor of Education (EdD) with a specialization in Higher Education Leadership. He hopes the program will help him meet his next career goal: becoming the chief academic officer or provost of a university.

Through all his years as a nurse, faculty member, and administrator, Nguh has never stopped volunteering. “Whenever I find myself with an extended period of free time, I love to volunteer,” he says.

In a recent effort, modeled after a project at his church, Nguh rallied his Kaplan University faculty colleagues to buy blankets and donate them to homeless shelters. In the future, he’d like to return to Africa to create an orphanage for children who have lost one or both parents to AIDS.

Nguh has learned from experience that finding funding for new initiatives is always the greatest challenge. He has some advantages in overcoming this obstacle: Over the course of his career, he’s acquired a large network of fellow healthcare professionals who help him connect with potential funders. He uses the research and needs-assessment skills he developed at Walden to strengthen his case for support. “Limited funding and resources demand us to be creative,” Nguh says. “It’s no longer a matter of thinking outside the box. There is no box—you’re only limited by your own creativity.”

Nguh encourages others to persist in their own efforts to serve. “The rewards of volunteering are phenomenal,” he says. “It energizes me and gives me a reason to keep giving.”

Whether you want to volunteer with an existing organization or start a nonprofit, Dr. Jonas Nguh’s advice can put you on a successful path.

Pinpoint your passions. Look for a purpose or organization that meshes with your personal or professional interests. Talk to people who work and volunteer in that area or start with a simple Internet search. If you find a cause that inspires you, it’s more likely you’ll continue volunteering. “Doing something you’re passionate about—it will keep you going,” Nguh says.

Start small. Attend a meeting or volunteer to distribute fliers. As you become more familiar with an organization, offer to do more. “Take it one step at a time,” Nguh advises. “I didn’t do this all at once; I just followed my father. Don’t attempt to accomplish too much too soon.”

Set the right expectations. Remember that the mission matters most. “Everything you contribute is useful and beneficial if it supports the mission,” Nguh explains. “That’s the whole idea of social change—even if you’re not the person at the forefront of the organization, whatever you do helps.”

Volunteerism and service are year-round activities! Find or share an opportunity on www.WaldenU.edu/servicenetwork.