Three Walden alumni, one in administration and two in union leadership, worked together to overcome a budget deficit and improve student learning. 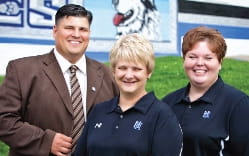 Budget woes are all too common today, but it’s possible to erase even a daunting deficit. In one Ohio school district, administrators, teachers, and union leaders worked together to achieve a financial turnaround in less than 18 months while enhancing education for students.

In January 2010, Dr. George Ash ’10, a Doctor of Education (EdD) alumnus, was the new Harrison Hills City School District superintendent. Then he got the bad news from a state-led audit: The small, rural Ohio district faced an $18.9 million deficit over the next five years. The audit led to a declaration of fiscal caution, the first step toward a state takeover. “Our district was pushed to the breaking point, but we saw the audit as an opportunity,” Ash says. “Our goal was to improve education and balance the budget.”

Ash turned to the Harrison Hills Teachers’ Association for help. That presented another challenge: Relations between the union and administration were strained as a result of a bitter strike in 2007. Nonetheless, Ash was determined to build a partnership. “The union leaders were willing to collaborate once they knew the facts,” he says. “Work with your union, show them the facts, make your plan educationally sound and within your budget, and people will get on board.”

The district closed and consolidated schools. The teachers’ contract was renegotiated and extended through 2015. Transportation, inventory, and food costs were reduced. At the same time, students gained more computer instruction time, a gifted-education program, and new classes.

With students redistributed across schools, the districtwide student-teacher ratio improved. A shift to a half-day preschool program expanded enrollment and eliminated a waiting list. “We came together to do what’s best for the district and our students,” says union president and fifth-grade teacher Roxane Starkey, a 2008 MS in Education (MSEd) alumna.

“At Walden, I learned how to set goals and reach them,” says Adrienne Cook, a 2009 MS in Education (MSEd) alumna, fifth-grade teacher, and the union treasurer who also worked on the plan. “Earning my master’s taught me how to pace myself, which is an essential skill for my union role and the partnership we developed to improve our district,” Starkey says.

Start Your Successful Turnaround
The actions that improved this district in Ohio can produce positive change in any budget crisis. Here’s how to do it in your community:

BEGIN INTERNALLY. Start with a feasibility study. “Don’t just look at what everyone else is doing. Think logically and show why a program is needed,” Ash advises.

COMMUNICATE OPENLY. “Communication—publicly and internally—got us where we are today,” says Cook. Respectful and honest communication builds trust and leads to effective teamwork. Talk to staff and union leaders first, but make information public through community meetings and news conferences.

STICK TO THE FACTS. Provide details and supporting documents to prevent emotion from overruling sound decision making. “At the beginning, our union was against the closure of schools,” Starkey says. “Once we were educated about the financial picture, we realized it was the best thing to do.”

Tell us what you’ve achieved with other Walden graduates by emailing [email protected].