The keynote speaker at Walden University’s commencement in Minneapolis inspired attendees to act. 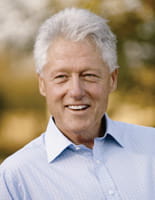 “Every single person who has been empowered with education has a fundamental decision to make, not so much about what you do, but how you think about what you do,” said President Bill Clinton, the 42nd president of the United States, the founder of the William J. Clinton Foundation, and the keynote speaker at Walden University’s commencement in Minneapolis, Minn., on July 30.

“We live in the most interdependent world in history, otherwise this institution could not exist,” he continued. “How can we build up the positive forces of our interdependence? The most important thing is whether you decide you’re off on your journey by yourself or whether you’re part of a larger landscape of interconnections with people in your community, your state, your nation, and the world.”

President Clinton, who received an honorary doctorate in recognition of his commitment to civic engagement, youth leadership, and education, also serves as honorary chancellor of Laureate International Universities, the global network of universities that includes Walden. As honorary chancellor, he advises the schools within the network in areas such as social responsibility, youth leadership, and increasing access to higher education.

“You have to turn your good intentions into positive changes,” he concluded. “Because of your education, you have acquired a heavy responsibility to help your fellow citizens. How you do it may be the most important question of the 21st century.”