Rewriting the Rules of the Road

Dr. Michael Eric Dyson explains why “failing” as a church pastor inspired him to build his own path to a PhD—and become a social activist. 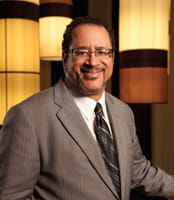 “You are not a passive consumer in the cafeteria of knowledge,” Dr. Michael Eric Dyson declared during his riveting plenary speech to Walden students and faculty members in Atlanta. “You’re obligated as a scholar to change the world in which you live.” The arresting orator, best-selling author, Georgetown University professor, and real-world activist underlined that learning is not a solitary quest—there is a very real responsibility to share your knowledge to positively impact your community. “Use your knowledge to transform the world,” he stressed. Walden met with Dyson to learn more about his path to a PhD, his mission of social change, and how higher education opens up “horizons of opportunity.”

YOU ARE A SELF-MADE MAN WHO STARTED YOUR CAREER AS A CHURCH PASTOR AND BECAME A COLLEGE PROFESSOR. YOU ENROLLED IN COLLEGE AT 21 AND WENT ON TO COMPLETE YOUR PH.D. WHY EARN A DOCTORATE?

Dr. Michael Eric Dyson: I got a PhD at Princeton University because I failed as a church pastor. I failed in a sense that I tried to ordain three women in the ’80s and it went over like a brick cloud. I was trying to live the principles I talk about today. One Sunday morning, I went to my church and the locks to my office had been changed. I went in the pulpit and preached, and afterward one of the deacons said, “Reverend, we have a problem.” And they voted me out on the spot. That was the bitter comeuppance I received as a result of trying to institute real change and to bring about the transformation of gender roles within a specific local church. It was an eye-opening experience. I knew then that I really wanted to become a scholar. So I went back to college with an eye toward earning a PhD.

OBTAINING YOUR PH.D. WASN’T A STRAIGHT PATH FROM POINT A TO POINT B. WHAT CHALLENGES DID YOU HAVE TO OVERCOME TO COMPLETE YOUR DEGREE?

Dr. Michael Eric Dyson: I left graduate school after the first three years. I needed an outlet to express myself vocationally and that would permit me to grow in my field as I was seeking to gain a master’s and then a PhD. So I went to teach at the Hartford Seminary and run a poverty project there for a year. And then I was recruited to go to Chicago Theological Seminary for three years. I completed my master’s degree in ’91. In 1992, I went to Brown University, and the next year I completed my Ph.D. and published my first book in the same month. A year after I finished my PhD, I was a full professor. I was off to the races.

WHO WAS THE MOST IMPORTANT MENTOR IN YOUR LIFE?

Dr. Michael Eric Dyson: I’ve had extraordinary mentors. There are so many teachers who were instrumental. And they mentored me in their various ways and various stages of my life and career and gave me a sense of who I was. And that provided the springboard for me into higher education. I started hanging out with my mentor Dr. Sampson when I was about 12 years old, when he came to my church to be the pastor. We would quote poetry to each other. He was invested in me in a very serious way. He said, “Use your education to help others.” He was my model, the inspiration for me to go on to become a minister, a pastor, and then a professor.

WHAT IS YOUR PERSONAL MISSION FOR SOCIAL CHANGE?

Dr. Michael Eric Dyson: I’m a social critic. So I have to try to bring the prophet’s tongue to the social practices of human community, as we struggle toward clarifying the goals of democracy, freedom, and justice. I write about those things and talk about those things, but I also have to act on them. I’m a social activist. I’m marching, speaking at rallies and organizations that are devoted to social change. And I’m also an intellectual who’s trying to think out loud in the public space about how to change the world. My role is to try to raise as much consciousness and, on occasion, as much hell to bring attention to problem areas and defend the vulnerable and those who wouldn’t ordinarily have a voice to speak for themselves.

IS THERE A DIVIDE BETWEEN YOUNGER AND OLDER GENERATIONS IN AMERICA? IF THERE IS, HOW DO WE BRIDGE THAT GAP? HOW DO WE LEARN FROM EACH OTHER?

Dr. Michael Eric Dyson: The generation that was once the young one turns into the established generation; their stories become the stories of the mainstream. Their outsider stories become insider stories. I think it’s inevitable that there is tension. I try to point out, sometimes in a humorous fashion, to older generations, hey, you used to be young, and now you’re beating up on young people, and you sound worse than the parents you claimed you’d never become. And yes, as you grow older, you get more sense and a better perspective, but you don’t have to become calcified and rigid. The ultimate good does not necessarily reside in your generation’s way of doing things. I think we have to challenge ourselves to be open to new generations’ ideas and identities. It’s incumbent upon older people to reach out to younger people. I’m not a young guy by any stretch of the imagination, but when I’m spitting their lyrics and listening to them, it shows them that, hey, here’s an old dude who’s actually so interested in our culture that he’s not just gonna trash it. He takes it seriously enough to understand us and to defend us to his peers. That takes you a long way.

AS A PROFESSOR, HOW DO YOU CONNECT WITH YOUR OWN STUDENTS AND COLLEAGUES? WHAT TOOLS DO YOU USE TO BRING THE BEST OUT IN ALL OF THEM?

Dr. Michael Eric Dyson: You have to have an open mind; you have to have the ability to innovate. You have to have creativity at the forefront of your academic regimen. A little humorous self-deprecation is always good. An identification with the culture of younger generations is good. If they know I’m interested in their culture, they tend to be more open to my insights about “my” culture. I write books, engage in the practices of a tenured professor, and try to be as intellectually rigorous as possible as a scholar. You have your mission; you’re out there to effect change.

WHAT ADVICE WOULD YOU GIVE TO OUR STUDENTS, ALUMNI, AND FACULTY MEMBERS WHO ALSO WANT TO COMMUNICATE THEIR OWN MESSAGES OF SOCIAL CHANGE?

Dr. Michael Eric Dyson: The obsession with learning is important: The desire to want to know and to expand the parameters of your knowledge and the desire to facilitate social change by becoming well-informed so that you can have empirical proof, the data at hand to engage in the examination of ideas, practices, or behaviors that are taken for granted. I think the online community opens up horizons of opportunity for people who might not otherwise get a chance to go to school, and I’m all for that. That’s what my life is about as well—opening up horizons of opportunity for people who are otherwise left out.