Out of the Rubble 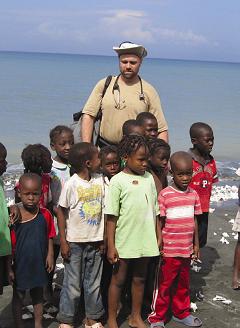 SOON AFTER THE 7.0-MAGNITUDE earthquake in Haiti, School of Nursing faculty member Tim Bristol was on the ground helping the relief effort in Léogâne, a town of 200,000 people and the epicenter of the January 12, 2010, catastrophe.

For 10 days, Bristol, along with a small group of nursing students, doctors, and a translator, awoke hours before sunrise and traveled from village to village to help people in desperate need of medical attention. Bristol recalls one man they encountered who was sitting in a chair with a crutch leaning on the wall beside him.

“We stopped to ask how he was doing. He said he was in a bit of pain—a block had fallen on his leg—but one of our surgeons examined him and discovered that his femur was completely fractured. The bones between his knee and his hip were mush, and he had spent the past seven days severely injured,” says Bristol. “We ran into so many situations like that.”

Some patients had to be airlifted to a Navy ship, the USS Comfort, while others were treated at the Episcopal University of Haiti (FSIL) School of Nursing in Léogâne, which had been converted into a fully functioning hospital.

Bristol’s involvement with FSIL, the first baccalaureate school of nursing in Haiti, began in 2007. In addition to making several trips to help support the new nursing school, Bristol and his family would host FSIL graduates and administrators in their Minneapolis home. “When the earthquake hit, I knew I had to get to Haiti and help our friends,” Bristol says. “I didn’t know how or when, but I knew I had to go.”

In late January, Bristol returned to his work and family in Minneapolis but couldn’t stop thinking about the new threats facing Haiti. There was the risk that toxic water could introduce a new wave of illness, and the possibility that millions of people would still be living in tents when hurricane season arrived.

By early March, Bristol was back on the ground in Haiti, leading a team of 28 people as they cleared rubble from Léogâne homes and churches, worked in medical clinics, and prepared FSIL classrooms for the return of nursing students.

Today, Bristol—who has shared his experiences with students in his Walden nurse-educator classes—remains in close contact with FSIL. “These trips have solidified my commitment to empowering Haitians,” he says. “What really makes an impact is us continuing to support education and growth in Haiti. I can only go down for 10 days at a time, but the nursing students will be there for the rest of their lives. If we give them the tools they need to learn and excel, we’ll really see some good things come out of the rubble.”

Help Walden and other Laureate International Universities donate $300,000 to the Haiti relief effort. 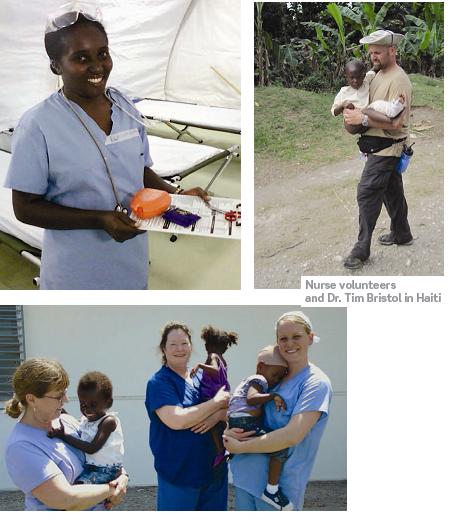