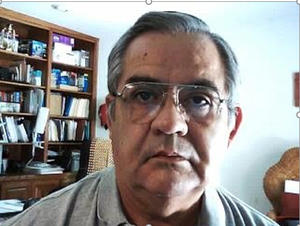 I'm writing to you from my home in Southern New Mexico. I'm located halfway between El Paso, Texas and Las Cruces, New Mexico; located in the proximity of a small farming community by the name of Chamberino.

I was brought up in Southern New Mexico in a small "Hamlet" farming community, La Mesa, of about 300 souls. Graduated from NMSU with a BS in Engineering and after about a six month stint with the Johnson Space Center at the White Sands Missile Range, I decided to go on to Graduate School.

I was championed on to the Harvard Business School by John Hernandez, then Dean of the College of Engineering, better known to most of us as the one time Director of the EPA. I received my MBA in 1975 after serving my obligations with the armed forces, that took me to Southeast Asia.

I have worked as a Commodities Trader and Plant Manager with Cook Industries, and have spent considerable time working overseas with Global Companies such as Castle & Cooke, Dole Fresh Foods, Lee Brands and Link International. I have spent many years overseas in Central & South America, and Japan in a variety of capacities with these firms.

I guess my "claim to fame" was that I was the last VP/GM with Dole Fresh Foods in Nicaragua, after the fall of Somoza and during the takeover of the country by the Marxist Sandinista Regime. My company's assets were nationalized and we were forced to leave the country.

I have temporarily abandoned the Corporate World and settled down to creating havoc operating two small businesses. One involves Venture Capital Investments and the other has to do with international Fresh Food Exports. The Export business has me involved in both the Latin America and Asian marketplaces.

My spare time is usually taken up with some reading, work on my small Pecan Orchard, and recreational flying...I'm a private pilot. I used to scuba dive when I worked in San Francisco with Castle & Cooke, but not so much these days...the waters in New Mexico are not quite as alluring. I'm married and have one daughter who teaches for Upper Iowa University in the areas of Criminal Justice and Business, and is currently pursuing a Law Degree.