Graduate School Commencement: The History and Meaning of the Cap and Gown

Traditions from the Middle Ages lend pomp and circumstance to graduation ceremonies.

Earning a graduate degree is a giant step toward your future—a journey worth celebrating at a pageantry-rich commencement ceremony. The dignified black robes and colorful regalia you’ll wear at graduation are symbols of your achievement and career goals. But they also connect you to 11th-century Europe and some of the first universities of the western world.

Hooded gowns were the customary academic uniform during the Middle Ages, although the outfits initially weren’t tied to graduation as we know it. “The ordinary dress of the scholar, whether student or teacher, was the dress of a cleric,” according to the American Council on Education’s history of the Academic Costume Code. “With few exceptions, the medieval scholar had taken at least minor orders, made certain vows, and perhaps been tonsured. Long gowns were worn and may have been necessary for warmth in unheated buildings. Hoods seem to have served to cover the tonsured head until superseded for that purpose by the skull cap.”1 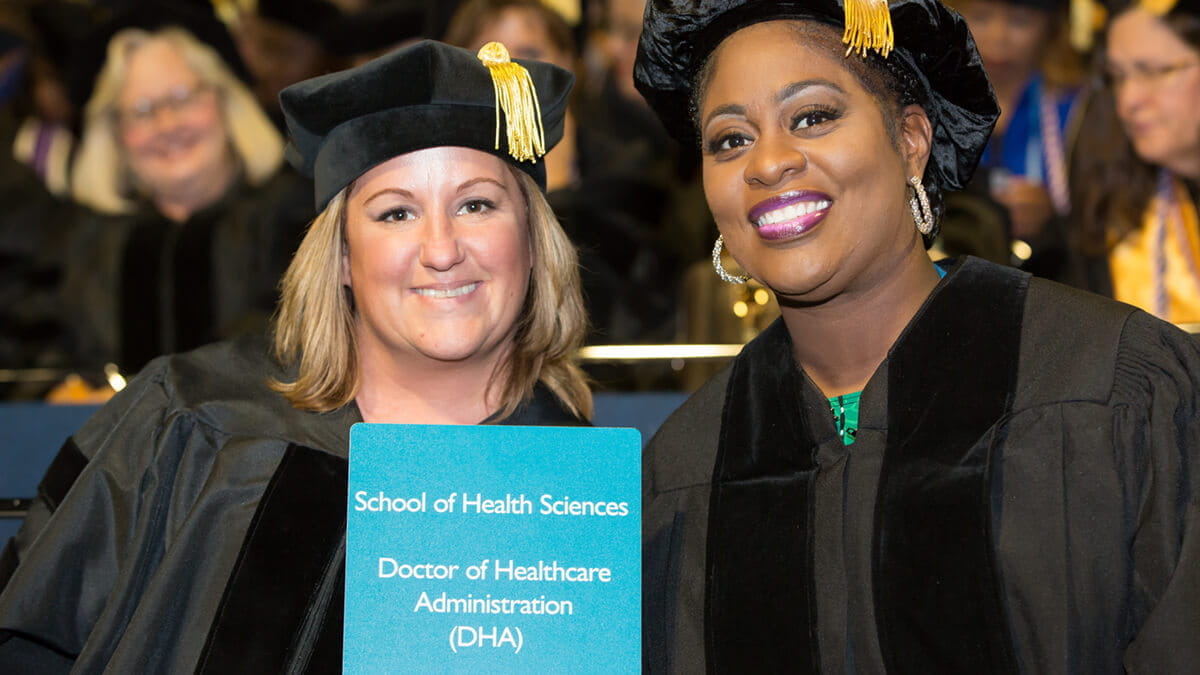 England’s University of Oxford and University of Cambridge are both credited with holding the first graduation ceremonies sporting ceremonial caps and gowns. The tradition traveled to the U.S., where, in 1786 the administration at Brown University in Rhode Island announced that “in future, the candidates for bachelor’s degrees, being alumni of the college, should be clad at commencement in black flowing robes and caps similar to those used at other universities.”2

In 1895, an intercollegiate committee gathered at Columbia University in New York to create a dress code to govern the garb and regalia worn at commencement for most colleges and universities. The Academic Costume Code, which has been updated through the years, specifies the type of clothing to be worn by degree achieved—bachelor’s, master’s, or doctoral—and by the degree’s discipline, like nursing, or public policy. The code’s specifications are precise to the inch, and the cut of the sleeve.

“The gown for the master's degree has an oblong sleeve, open at the wrist, like the others,” the code states. “The sleeve base hangs down in the traditional manner. The rear part of its oblong shape is square cut, and the front part has an arc cut away. The gown is so designed and supplied with fasteners that it may be worn open or closed.” Distinguished black gowns are plain except for those for doctoral degree recipients, whose robes may have velvet fronts and three velvet stripes on each sleeve.

Hoods are a significant part of commencement ceremony attire, but they no longer cover heads as they did long ago. Today’s hoods are worn over the shoulders and drape down the back. The colors of the trim and lining provide important clues. Hoods are lined in a school’s official color—green at Walden University. The binding, 3 inches wide for master’s degree recipients, is also color-coded—light blue for students graduating from Walden’s The Richard W. Riley College of Education and Human Sciences, for example. Some universities, like Walden, hold a special hooding ceremony where the hood is draped over the head of graduates to signify the students’ success in completing his or her graduate program.

Topping it all off is the most iconic of graduation hats, the mortarboard. These square, four-cornered caps with tassels dangling from the top are “generally recommended” attire by the Academic Costume Code. Inspiration for the design has been traced to the biretta, a word whose first documented use was in 1598.3 The square cap worn by priests has three raised pieces that converge to support a pom-pom on top. The cap’s name is said to derive from the square board used in masonry to hold mortar. Through the years, the mortarboard has captured the imagination of U.S. inventors who have sought to improve it. One inventor received a patent in 1930 for a sliding metal mechanism designed to create a better fit, an adaptation that did not pass the test of time. Similar to the mortarboard is the graduation tam. This soft-sided graduation hat is worn by master’s and doctoral students and has four, six, or eight sides depending on the level of education attained.

As today’s graduate school students head to commencement wearing traditional attire, some do add their own contemporary touches. Look to the top of the mortarboard for proud declarations: “My Turn to Teach,” “Adventure Awaits,” “I Did It.” What will your mortarboard say? Take a step toward your future and earn a degree online. Your cap and gown, and an exciting new career await.

Walden University is accredited by The Learning Commission, www.hlcommission.org.