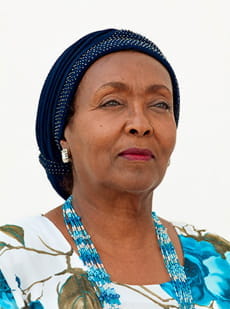 Minneapolis—January 21, 2015—More than 1,050 graduates and their 4,600 guests are expected to attend Walden University’s 53rd Commencement Ceremony on Saturday, Jan. 31, at the Gaylord Palms Resort in Orlando, Florida. They are part of a graduating class of more than 6,000 students—representing all 50 U.S. states and 97 countries—who have completed bachelor’s, master’s, doctoral and education specialist degree programs at Walden during the past six months. Thousands more are anticipated to participate via live webcast, starting at 12:30 p.m. Eastern time at www.WaldenU.edu.

Edna Adan, former foreign minister and first lady of Somaliland, will deliver the commencement speech. Adan was the first Somali girl awarded one of a few coveted scholarships to study in Britain, where she spent seven years studying nursing, midwifery and hospital management. When she returned home to Somaliland, she became the first qualified nurse-midwife in the country. In 1967, she became first lady of Somalia when her husband, Muhammad Haji Ibrahim Egal, was elected prime minister.

Recruited to join the World Health Organization (WHO) in 1986, Adan held various key positions advocating for the abolition of harmful traditional practices, such as female genital mutilation. She was also responsible for the training of midwives and traditional birth attendants in the 22 countries of the Eastern Mediterranean region of WHO. Now she serves as president of the Organization for Victims of Torture and is the director and founder of the Edna Adan University Hospital in Hargeisa, Somaliland. Since the hospital’s opening in 2002, the maternal mortality rate of its patients is one-fourth of the national average. The hospital’s goal is to train fully qualified healthcare professionals as well as train and dispatch 1,000 midwives throughout the country.

Adan held the position of minister for family welfare and social development and most notably held the title of Somaliland’s foreign minister from 2003–2006. She was added to the Medical Mission Hall of Fame at The University of Toledo in 2007. In 2012, she was featured in the acclaimed PBS documentary Half the Sky: Turning Oppression into Opportunity for Women Worldwide, inspired by the book of the same name by Nicholas Kristof and Sheryl WuDunn. Adan previously served as French ambassador to Djibouti, and in 2010 was knighted for her service by French President Nicolas Sarkozy. She also holds honorary doctoral degrees from Clark University in Massachusetts and the University of Pennsylvania.

About Walden University
For more than 40 years, Walden University has supported working professionals in achieving their academic goals and making a greater impact in their professions and their communities. Today, more than 47,800 students from all 50 states and more than 150 countries are pursuing their bachelor’s, master’s or doctoral degrees online at Walden. The university provides students with an engaging educational experience that connects them with expert faculty and peers around the world. Walden is the flagship online university in the Laureate International Universities network—a global network of more than 80 campus-based and online universities in 29 countries.