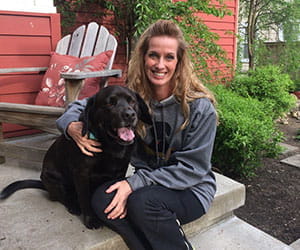 When Dr. Michelle Roberts-Schneider, a ’16 PhD in Education graduate and mother of two, was unhappy with the quality of care her children were receiving while she was working full time, she decided to do something about it. In 2003, she founded All 4 Kids, a home-based child care center in Brookville, Indiana—one of the most impoverished counties in the state.

In 2014, All 4 Kids became the first and only home-based early learning program in Indiana and the third in the nation to receive national accreditation by the National Association for the Education of Young Children, a hallmark of distinction and quality based on professional standards. The program has grown to include a staff of 11 and nearly 90 students ages 6 weeks to 12 years.

“My teachers identified eight kids whose social-emotional skills were lacking, which is not uncommon for low-income families,” Roberts-Schneider says. “After researching support options and exhausting plans and programs to help improve their development, we decided to introduce Bear—my family’s first rescue dog—to the program.”

Even with no physical contact between Bear and the children, Bear became a calming presence that positively changed the environment, helping children manage their own emotions and become more confident in their abilities. “We had one family whose morning drop-offs would be challenging as the child would cry very hard, but after introducing a dog whose wagging tail showed immense happiness to see the child, the tears soon became giggles and drop-off became easier for all.”

With a desire to dive into learning more about therapy animals and what impact they could have on young children, she pursued a doctorate. “I already had my master’s degree in education, and I was working 70 hours a week,” she says. “When I enrolled in Walden’s doctoral program, I already knew what I wanted to focus on, even when others suggested I change or tweak my research focus.”

Roberts-Schneider’s dissertation, How Educators Utilize Dogs to Support Children’s Social, Emotional, and Behavioral Development, addresses the gap in numerous studies that have illuminated how therapy dogs in pedagogical settings support children’s holistic development but provide scant data on the integration of therapy dogs into the early childhood classroom.

As All 4 Kids added more rescue dogs to the program, the animal interaction not only positively impacted the children but also the teachers, support staff, and administrators. “I wondered if this therapy would also be helpful for not just those who are needy but for anyone,” Roberts-Schneider says. “To my surprise, Indiana schools and other industries and organizations oftentimes overlook the abundant resource: dogs left at the pound.”

As innovative as ever, Roberts-Schneider and her husband founded Bear & Friends Animal Society, Inc., in 2013, a nonprofit organization that works with a host of shelters and pounds, as well as the public, to rescue animals. “We have some cats and even two fish,” she says of the program, which held its first Hounds & Heroes Gala in 2017 and now boasts 14 dogs. “Many people just don’t realize the potential that is sitting in shelters across the nation. Dogs can offer people a great deal, not just as pets but also as therapeutic resources.”

Roberts-Schneider is applying her research daily and says earning her doctorate has given her more confidence. “Having the added knowledge opens more doors for me, and I also find people want to listen to what I have to say,” she says. She has had meetings with boards of community foundations, the Veterans Affairs administration office, and The American Legion to promote her program that encourages the use of therapy animals.

The Indiana Department of Education contacted her to inquire about replicating her program in schools across the state. “I reached out to 500 schools, and so far, only four in the area have regularly utilized therapy animals,” Roberts-Schneider says. “It is a slow start, but I’m still hopeful with time we will show how these animals can serve a greater purpose and help children in need.”