Global Day of Service in Action

Alumna Persephone Munnings ’10 leads a project in the Bahamas to promote health and awareness. 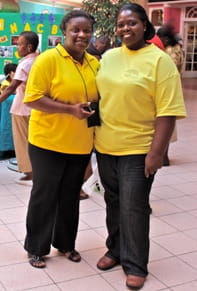 The leading causes of death in the Bahamas are chronic, noncommunicable diseases such as cardiovascular disease, cancer, and diabetes. For Persephone Munnings, a 2010 Master of Science in Nursing (MSN) alumna, the numbers are too high—and awareness of how to prevent these diseases is too low.

Munnings led one of Walden University’s more than 200 Global Day of Service projects on Oct. 1. The health screening and education session, held in conjunction with the Nurses’ Association of the Commonwealth of the Bahamas, was designed to raise awareness of the prevalence of these diseases and promote positive lifestyle changes through counseling and referrals.

She drummed up support for her project by speaking about it at local meetings, distributing fliers to healthcare institutions, and by sending letters to hospital administrators and nurses. She also publicized the event on TheBahamasWeekly.com.

“Even though much of the work required nursing skills, other volunteers were invited to take photos, register volunteers and patrons, set up display boards, and record test results,” Munnings says. “They realized immediately that their participation could help reduce the impact of these diseases.” She also says she is grateful to the volunteers who donated screening equipment and supplies and provided lunch for the volunteers doing the health screenings.

At the end of Global Day of Service, her team had provided health screenings for 300 people who otherwise might not have been tested. “The feeling of fulfillment cannot be overemphasized,” Munnings says. “Walden challenges its students and alumni to make a positive difference in society, so I seized the opportunity to give back.” The entire team looks forward to Global Day of Service 2012.

Global Day of Service by the Numbers

Nearly 3,700 Walden volunteers positively impacted communities around the world on Oct. 1, 2011, during the sixth annual Global Day of Service—more than doubling the previous year’s participation. Alumni, students, and faculty and staff members demonstrated the international impact that social change agents can make in just 24 hours.

Here are the numbers:

More than 33% of the service projects were international, spanning Central and South America, Africa, Europe, Asia, and the Caribbean.

More than 230 volunteers participated in the Thank Our Troops project by writing letters to members of the military.

The next Global Day of Service is set for 10/6/2012. Remember to look for year-round volunteer opportunities on the Walden Service Network at www.WaldenU.edu/servicenetwork.