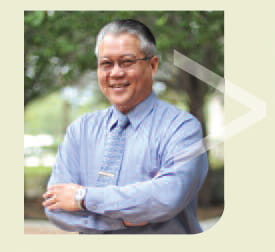 DEGREE PROGRAM: PhD in Education with a specialization in Community College Leadership

HOW DID YOU LEARN ABOUT WALDEN? There are quite a few Walden graduates among my colleagues at Lone Star College—including the president of the Montgomery campus, Dr. Austin Lane. But I was actually referred by my mentee, Dr. Kozhi Makai, who I originally referred to Walden.

SOMEONE YOU REFERRED TO WALDEN REFERRED YOU TO WALDEN? Yes! I became Kozhi’s mentor in 1995, when he moved to the United States from Zambia to attend Lone Star College. He worked as my student assistant, and because he is such a gifted individual, I really pushed him to excel. He eventually transferred to Sam Houston State for his bachelor’s, and then went on to Jones International University for his master’s. I told him not to stop, and by 2005, he had received his PhD in Applied Management and Decision Sciences from Walden.

When Kozhi finished, he told me that it was his turn to push me toward a higher degree. Now he’s my advisor, and now he has insight for me.

WHEN DID YOU KNOW WALDEN WAS THE RIGHT PLACE FOR YOU? When I learned about Walden’s intent to effect social change by developing scholar-practitioners. At that time, I also realized that I wasn’t getting my degree just to have an extra letter after my name—I want my dissertation to effect change in my community and beyond.

WHAT HAS WALDEN TAUGHT YOU SINCE YOU STARTED IN 2008? Though I’ve worked in the community college system for 16 years, it wasn’t until I came to Walden that I understood that many middle-level administrators never get the opportunity to become leaders in their schools. Right now, community college leaders around the country are getting ready to retire. I want to start a program that will enhance the skills and abilities of middle-level administrators so they can step up to the next level. I want to see that people in my own community college who want to be leaders have the chance to do so.

WHY DO YOU REFER OTHERS TO WALDEN? Walden offers my colleagues higher learning that will enhance their professional roles, and their research will effect social change in society. The work is rigorous, but offers the convenience of working, researching, and interacting with colleagues and faculty without the constraints of travel.

HOW MANY PEOPLE HAVE YOU REFERRED TO WALDEN? I have referred approximately 10 colleagues to Walden.

Refer someone to Walden. If you've already referred someone who is a current student at Walden, send an email to [email protected]