Champions of Social Change Inspire Us All

It was an honor to preside over Walden University’s 60th Commencement Ceremonies on July 28 and to celebrate the achievements of more than 1,100 graduates. Walden board members, faculty, and I welcomed graduates from around the world at three ceremonies in our hometown of Minneapolis.

Commencement offers so many lasting memories for graduates, from meeting faculty and fellow graduates in person to celebrating with family, friends, and supporters at our alumni reception and graduate celebration. One of the highlights for me was the privilege of hearing from our three keynote speakers, each of whom delivered inspiring messages for our graduates.

Justice Alan Page, the first African-American to serve on the Minnesota Supreme Court, delivered an inspirational keynote address during our final graduation ceremony. Now retired, the Pro Football Hall of Famer from the Minnesota Vikings and Chicago Bears is focused on the Page Education Foundation he created with his wife to assist students of color in their pursuit of postsecondary education. During his keynote address, Justice Page talked about how fear is no obstacle for proper preparation and shared a message of self-actualization.

“Each one of us has the obligation to act in ways that build rather than diminish our character, and the characters of those around us,” said Justice Page. “Consciously applying the values you’ve learned from your Walden education will serve you well as you strive to be a person of good character. Doing so will also serve society well, as you go forward to make a difference in the world. As members of the class of 2018, you are among the privileged few. I ask that you use that privilege, the power that comes with it, and the tools that you have acquired at Walden to do what you can to bend the moral arc of history toward justice.”

Dr. Crystal Francis, a member of the Walden University class of 2018 who earned her PhD in Public Policy and Administration, delivered the commencement address at our doctoral hooding ceremony. In her speech, Dr. Francis encouraged her fellow graduates to remember their “why,”—what motivates them—which she used as a guiding star throughout her journey at Walden.

When she started at Walden in 2012, Baltimore was the seventh most violent city in the U.S., according to data from the FBI’s annual Uniform Crime Report. Today, Baltimore leads the FBI report’s data on most violent cities in the U.S. Dr. Francis was driven by her passion for criminal justice reform with the hope of researching ways to reform the U.S. criminal justice system.

As she said during her remarks: “I was eager to find ways to decrease mass incarceration and crime in the United States. I pursued this degree because my community needs me to find answers to problems many leaders have been attempting to solve for the past 20 years,” said Dr. Francis.

Author and filmmaker Carolyn Jones delivered the commencement address to Walden’s nursing graduates. Jones is devoted to celebrating invisible populations and breaking down barriers. Her most widely acclaimed books include Living Proof: Courage in the Face of AIDS and The American Nurse, which led to a feature documentary included in the U.S. State Department’s American Film Showcase. Her newest documentary, “Defining Hope,” which was made possible in part by Walden University, represents the culmination of a journey how to provide better end-of-life care. In the film, Jones follows eight patients with life-threatening illnesses and the nurses who care for them. Though Jones joked about being a journalist and not a nurse, her message to our nursing graduates was powerful.

“Do you ever think about why nurses are voted the No. 1 profession? I do. I’ve thought about that and there’s a reason for it,” said Jones. “You are all unbiassed. You care for us, no matter what color we are, what religion we practice, [or] what political party we belong to. You are hardwired to care for others and your profession will reinforce that day after day. And that, for me, makes you really unique and valuable citizens. Maybe more valuable than any other profession. … You all understand humanity better than anyone else. … That puts you in a really unique position to have great ideas when it comes to making the world a better place. … I think Walden University has prepared you well to be the change that we need in this country. … We are so lucky to have you.”

Our commencement speakers shared inspiring messages of encouragement and community engagement. I hope our graduates left commencement feeling empowered to use their credentials as scholar-practitioners to effect positive social change where they live and in communities around the world.

If you were in Minneapolis with us or watching the streaming video from where you live, please share what inspired you most during Walden’s 60th Commencement Ceremonies.

Stay tuned for a video of my interview with Justice Page. 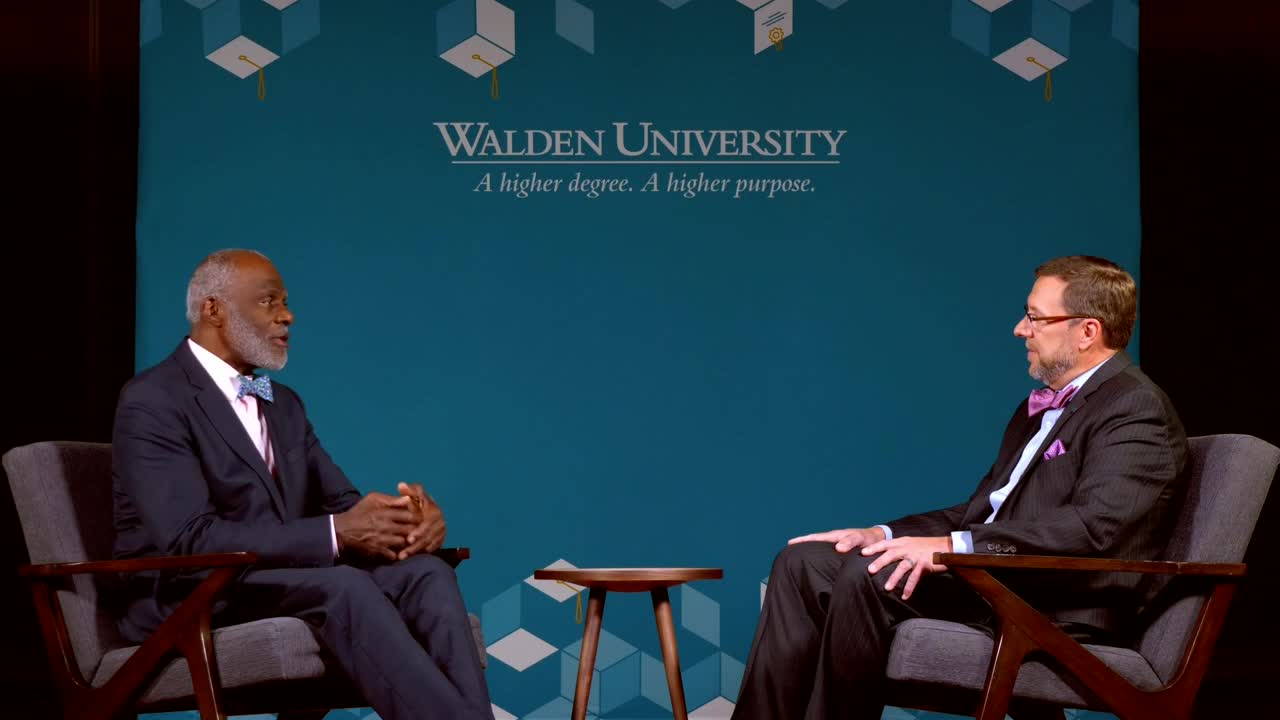